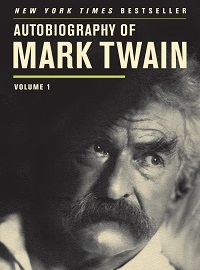 Mark Twain endures, I think, in part because he was a fascinating mass of contradictions.  Twain is celebrated for his humor, but read this pessimistic quote from his autobiography:  “The main-spring of man’s nature is just that – selfishness.  Man is what he is … [he] tarries his little day, does his little dirt, commends himself to God, and then goes out into the darkness, to return no more, and send no messages back – selfish even in death.”  And this quote:  “These tiresome and monotonous repetitions of the human life – where is their value?  Susy [Twain’s daughter] asked that question when she was a little child.  There was nobody then who could answer it; there is nobody yet.”  The man obviously had dark thoughts.

More apparent contradictions:  Twain was a champion of the “little guy,” yet his friends were business titans and presidents.  He was a sharp social critic, yet could react petulantly to criticism of his own work.  This autobiography, planned for release 100 years after Twain’s death, is at once comforting and disturbing, as is the man himself.  Helen Keller described Twain as someone who thought of himself as a pessimist but was in reality an optimist.  I’m not so sure about that.