God Is Not Great: How Religion Poisons Everything 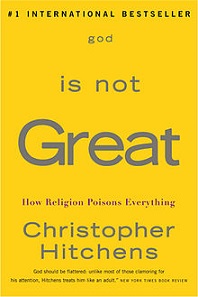 Hitchens’s book isn’t so much a refutation of god as it is a full-throttle slam on religion.  As a condemnation of man-made worship, the book is relentless – and persuasive.  But as a treatise on whether or not god exists?  Hitchens has no better arguments than anyone else.  As he puts it himself, “Those who believe that the existence of conscience is a proof of a godly design are advancing an argument that simply cannot be disproved because there is no evidence for or against it.”

For all of his damning evidence against religion’s role in human history, I am still left with one overriding question:  Has the good done by religion balanced out the evil done by religion, or is the ledger as one-sided as Hitchens would have us believe?