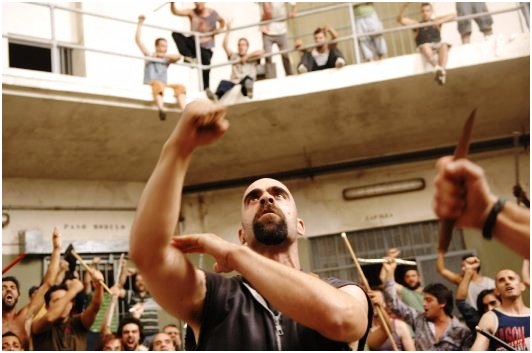 It’s funny how one flaw in a movie can make all the difference between an enjoyable time or an exasperating experience.  Cell 211, a Spanish prison thriller, is absorbing for about 30 minutes – but then a key relationship that does not ring true spoils all the fun.

The movie has a clever premise.  A rookie prison guard has just walked into the joint when all hell breaks loose.  There is a riot, violence and, in the confusion, guard trainee Juan (Alberto Ammann) is mistaken for one of the inmates.  He becomes trapped with hundreds of vicious cons as tense negotiations begin between prison officials and the inmates’ leader, Malamadre (Luis Tosar).

And this is where the movie lost me.  Implausibly, the tough, shrewd Malamadre is so impressed by a couple of seemingly pro-inmate suggestions made by newcomer Juan that the hardened con and the stubble-faced young man quickly become Best Friends Forever.  This plot absurdity turns what might have been a tense thrill ride into a series of “yeah, right” moments.

I don’t generally read a lot of reviews before writing mine, but yesterday I noticed two local scribes with opposite takes on Cell 211.   Said Critic Number One:  “It’s a great, simple premise, and I will be surprised if we don’t get an American remake … this may be one case where a remake is justified.”  Said Critic Number Two:  “I’ll bet you $100 that Hollywood snaps up this property for a glossy, star-studded remake. I’ll bet you $1,000 that this version is better.”

I’m taking the side of Critic Number One.  For once, Hollywood has the opportunity to actually improve on a foreign film.         Grade:  C 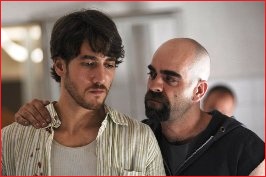 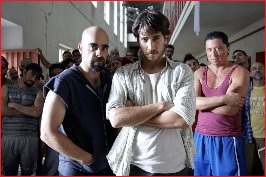