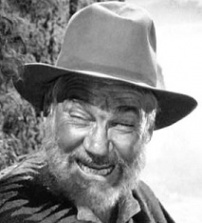 The old man looked around for a spittoon, realized there wasn’t one, and spat a wad of something brown and chunky into the corner of the room. He shot a glance at the boy seated on a stool near the cabin door.

“Like that one, Johnny?”  The old-timer began to cackle but stopped when he recalled the duration and unpleasantness of his last coughing spell. Laughter, like everything else when you grew old, had become a health hazard for him.

The boy sat very still and quiet on the two-legged stool, which was no longer three-legged and was only useable if one leaned back against the cabin wall — Johnny’s current, precarious position. The old man winked at Johnny and began rubbing the crotch of his grimy overalls. Johnny kept his gaze on the rheumy, dewy eyes of the geezer.

“Want to see my manhood now, eh Johnny?” The old-timer got no reply to this; the boy apparently had no sense of fun. The old man waited patiently. No response.

The smile vanished from the old man’s face when he realized that the boy meant business. He looked away from the kid, toward the mottled, disgusting wad of phlegm and tobacco he’d spat into the corner. Two ants were rapidly making their way across the floor toward the messy glob, sensing a meal.

“OK. OK, then, watch and learn something,” said the old man. He closed his bloodshot eyes, raised his face toward the ceiling of the old hut, furrowed his brow, and recited a quote from the Bible: “While I was praying, Gabriel, whom I had seen in the earlier vision, came flying down to where I was. It was the time for the evening sacrifice to be offered.”

The man stopped and checked on Johnny, making sure his audience was paying heed. Satisfied, he looked again at the ants, now climbing atop the splash of spent tobacco.

“He said to them, ‘It is written: My house shall be called a house of prayer; but you make it a den of robbers!’”

The old man raised a boot and brought it down hard, squashing the ants as they fed. He bent low to the floor, retrieved what was left of one ant, and studied a spindly leg protruding between his fingers. The leg appeared to twitch once, and then ceased all movement.

“That was you, Johnny Blackwell. You and me. Tell me now, just before I sent them ants to kingdom come, were you concerned about their eternal souls? Answer me that!”

No reply. But Johnny was rapt.

“Them ants don’t belong here, no ways. Know what they be, Johnny? Robbers! Robbers and squatters!

“Squashed squatters!” He laughed uproariously at his own joke.

Johnny had watched as the old man squished life out of the ants, but now he returned the geezer’s stare. “You speak wisdom, old-timer,” he said.

“Damn right I do. Give me them preachers and them philosophers and them’s on TV and whatnot. So concerned about our souls! Who’s to say them ants don’t have no souls? Not you! Nor me!” The old man’s face expressed rage and revelation. He trembled. He smiled again. “Now, I ask you agin: Want to see my manhood?”

Johnny slowly shook his head. Sooner or later, their conversations generally came around to this.

He rose from his seat in the corner, careful not to topple the rickety stool. “As per usual, you speak wisdom, old man. But your horniness will get you in trouble one day.” Johnny shuffled toward the cabin door, felt his face flush a bit, and turned back. “Well, I reckon just a quick one then.”

The old man’s eyes lit up. He frantically tugged at the fly of his overalls ….

Johnny opened the door of the ramshackle abode and began walking away. Without turning back, he said, “We’ll do this again, old man. I allow that I still have much to learn.” And then he was gone.

The old man watched Johnny walk down the path. He turned to his gun cabinet, opened its door, and removed a shotgun. He knew it was loaded, and it took him no time at all to level the barrel at Johnny’s receding backside. Another Bible verse came to mind, and he spoke it to himself: “And as a dog returneth to his vomit, so a fool returneth to his folly.” He lowered the shotgun, cackled again, and re-entered the hut.

He examined the splotch of chaw on the floor, then studied what was left of the ants. He looked up at the ceiling and watched it implode.

A chariot with teeth was descending toward him, like the vision of Gabriel: He came flying down to where I was. His mouth gaped wide.

The chariot with teeth lowered itself and took hold of him, clenching its jaws shut as it did so. The old-timer was hoisted up, up, and out through the roof, toward the blinding sun and, the old man had time to hope, toward his reward in the heavens.

Johnny, still walking down the dirt path, heard a crash from behind and turned in time to see an amazing sight: the old man, aloft high above the cabin and in the grip of a metal box. One spindly leg protruded from the claws of the giant crane. It appeared the old man was being crushed.

City employee Jim Hagerstrom was in heaven. He sat in the cab of a brand-new MB excavator and watched in awe as its attached crusher emerged from a cloud of dust and climbed high above the cabin roof.

The MB was amazing, an incredible (and expensive) piece of engineering that made small-scale demolition — like that of this abandoned eyesore of a cabin — easier than ever. Jim Hagerstrom was proud of the expensive machine, and he was pleased that his supervisor had trusted him with such dear hardware. The excavator and its crusher together came to near $80,000.

As the dust began to clear, Jim thought he saw movement in the jaws of the metallic crusher. Almost looked like a man’s leg. Probably just a piece of furniture.

Surely that old squatter who they’d chased away in the spring was long gone … surely?

Tagged: Tales From The Grouch, Wisdom