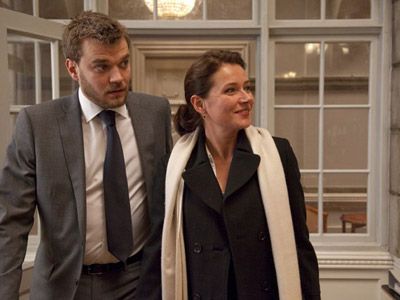 Above, Kasper and Birgitte kick political ass in Denmark

How to Make a Great TV Show … and Ruin It

Midway through my binge-watch of Denmark’s acclaimed drama Borgen (2010-2013), somewhere during season two of the three-season series, I decided I was watching the best political show television has ever produced. And yes, that includes The West Wing and House of Cards (American version; I haven’t seen the British original).

Borgen isn’t as rah-rah patriotic as West Wing, with the latter’s rousing speeches and good-guys-win storylines. Nor is it as melodramatic as House of Cards; no reporters get pushed into the path of an oncoming subway train.

But the show’s balance of governmental machinations with the toll taken on participants’ personal lives is unparalleled.

Yet a funny thing happened on the way to Borgen’s third season: They demoted the most interesting character. Pilou Asbaek, as the prime minister’s charming-yet-conniving “spin doctor,” Kasper Juul, went from one of two main reasons to watch Borgen (the other being Sidse Babett Knudsen as Prime Minister Birgitte Nyborg), to brief, token appearances in the third and final season.

Turns out I can’t blame this disastrous development on the show’s writers. Turns out Asbaek made other acting commitments during the lull between seasons two and three, while the show’s network was mulling renewal for another ten episodes. As a result, Borgen went from a great show to … a good show.

But I highly recommend it – especially those first two seasons.

Question: What would happen if the media and regular folk stopped taking pictures and video at the ongoing riots? What if only the print media were allowed to report on the chaos?

My guess is that most of the madness would die out. No pictures, no story.

For once, LeBron James and I agree on something.