I have a weakness for movies like this one. You know: wilderness movies with hungry bears, or deep-sea movies with dead-eyed sharks. That’s because, unlike most sci-fi and horror films, these scary stories could really happen. To you. Or to me. Walking Out, in which a father and his teenage son encounter peril in the Montana mountains, does well with its survival elements. On the downside, although Matt Bomer and Josh Wiggins are believable as dad and son, their on-screen chemistry left me a bit cold. Release: 2017 Grade: B 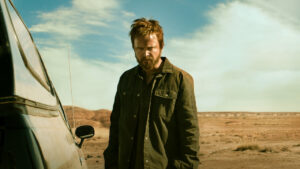 Whenever a studio announces plans for a movie version of a beloved TV show, the hope, at least among fans of the series, is that the movie version will be bigger and better. Bigger budget = better experience. There is good news and bad news about Netflix’s two-hour revival of the classic Breaking Bad. The bad news?  The movie, which follows the trajectory of young Jesse Pinkman (Aaron Paul) after the death of Walter White, is no better than the series. The good news? The movie is just as good as the series – and you don’t get any better than that. Release: 2019 Grade: A