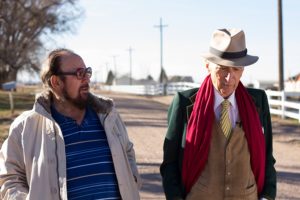 This might be one case where the movie is better than the book. Famed journalist Gay Talese’s nonfiction account of a Colorado Peeping Tom was often a repetitious slog through the mind (and journal) of Gerald Foos, a motel owner who for years spied on unsuspecting guests through ceiling vents and then recorded his observations.

This documentary, on the other hand, is less about peeping and more about two old men who are both preoccupied with how they are and will be perceived by the rest of us. The juxtaposition of the proud and meticulous Talese with his partner in crime, the alternately insecure and self-aggrandizing Foos, as they strive to publish Foos’s perverse tale is an often-fascinating look at fame – and infamy – in America. Release: 2017 Grade: B+

Nocturama is stylish, beautifully shot, and has several scenes that are truly harrowing. But too bad the editor wasn’t in charge of things, because the movie also has a lot of sequences that drag on needlessly – especially during the first hour. Writer-director Bertrand Bonello’s premise is a good one: A group of disaffected young people are persuaded to plant bombs on the streets of Paris, and then hide out in an upscale department store while all hell breaks loose in the city. But in that first hour, Bonello’s camera dwells on every corner the kids pass, every elevator they use, and every subway change they make on their way to planting the bombs. Yet the rest of the film is a chilling portrait of what could come next in the form of terrorism.  Release: 2016 Grade: B+