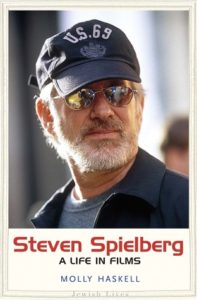 I’m of two minds about Steven Spielberg. I share the general belief that he’s a brilliant showman. I think that Jaws, for example, might be the best adventure film ever made. On the other hand, I hold Spielberg largely – if indirectly – responsible for the sorry state of Hollywood today, with its glut of “franchise” movies and over-emphasis of special effects. Not to mention studios’ “will teenage boys like it?” marketing mentality.

The publisher was wise to assign this short-but-insightful Spielberg biography to Haskell, a renowned critic who appreciates the filmmaker’s talent and influence but is not, by her own admission, a die-hard fan. Haskell’s chapters are chronological, linking Spielberg’s personal life and evolution to the plots and themes of his movies. I didn’t always agree with her evaluations, but her prose is unfailingly thought-provoking.

To me, the book is most interesting in the chapters about early Spielberg, when the wunderkind was setting the world on fire with energetic, imaginative blockbusters like Close Encounters of the Third Kind and Raiders of the Lost Ark. Later films like Empire of the Sun, Amistad, and Lincoln might hold more appeal for a serious analyst like Haskell, but I’ve always felt that when it comes to a Steven Spielberg movie, popcorn is more palatable than polemics.