Since this story is about Pocahontas, shouldn’t the headline read “Warren on the Warpath”?

I used the bathroom at Target the other day and nothing happened. No protesters, no perverts. Very disappointing. 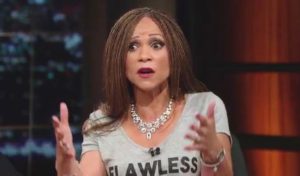 Flawless? Hmmm. Seems like if you are fired from your MSNBC talk show, which routinely attracted about six viewers, there might be a flaw or two somewhere in your clothes closet.

On the other hand, you do inform us on your Web site that you are an “intellectual,” and the t-shirt could be referring to your boobies …. 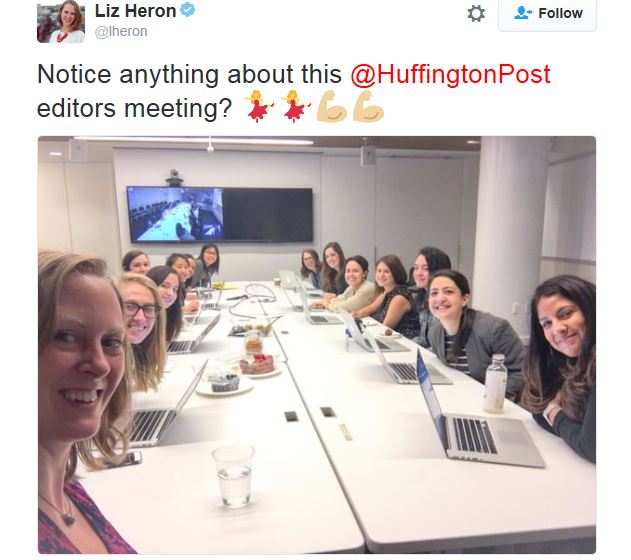 Do I notice anything about this meeting? Oh, sure. Aside from the shocking lack of diversity and the smug expressions, as usual I see no proofreaders. 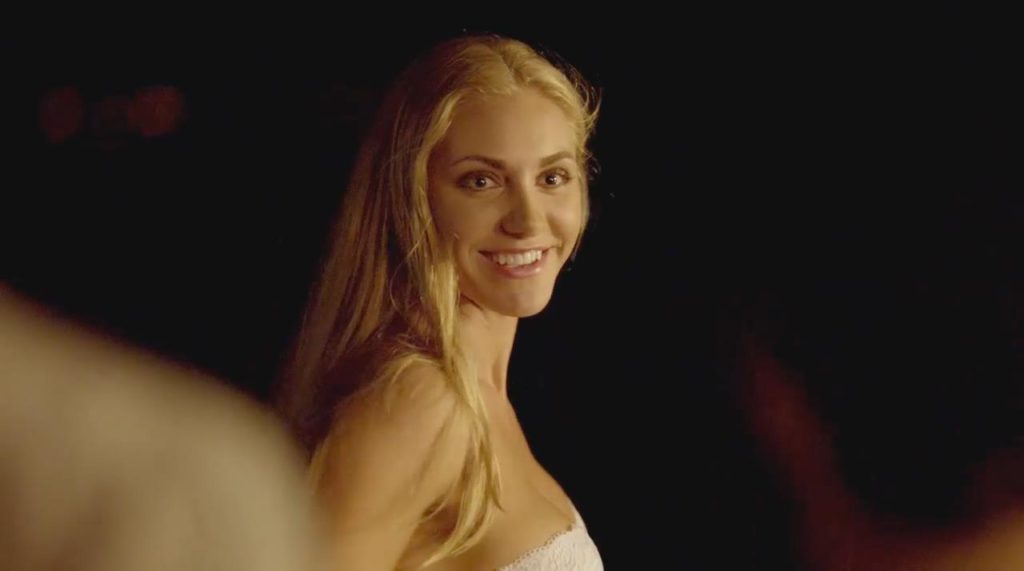 I was watching a mediocre horror series called Slasher, produced by a channel you haven’t heard of, when I recognized a familiar butt. The shapely derriere belonged to an actress named Jessica Sipos, above, who also appeared in another mediocre series called Ascension.  I cannot recommend either of the mediocre shows, but I wholeheartedly endorse Jessica’s muscular cheeks, which compose our Butt of the Week. 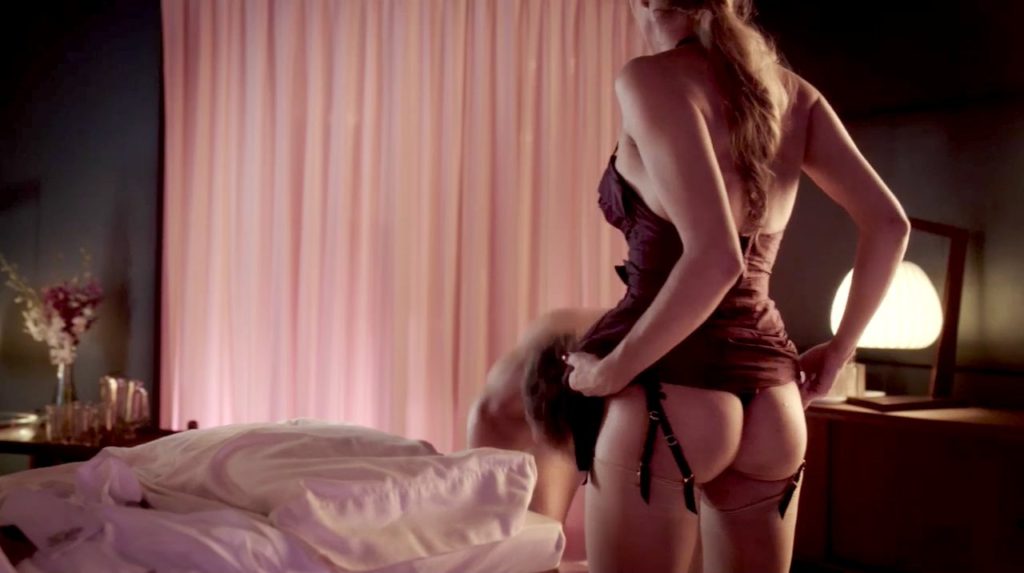 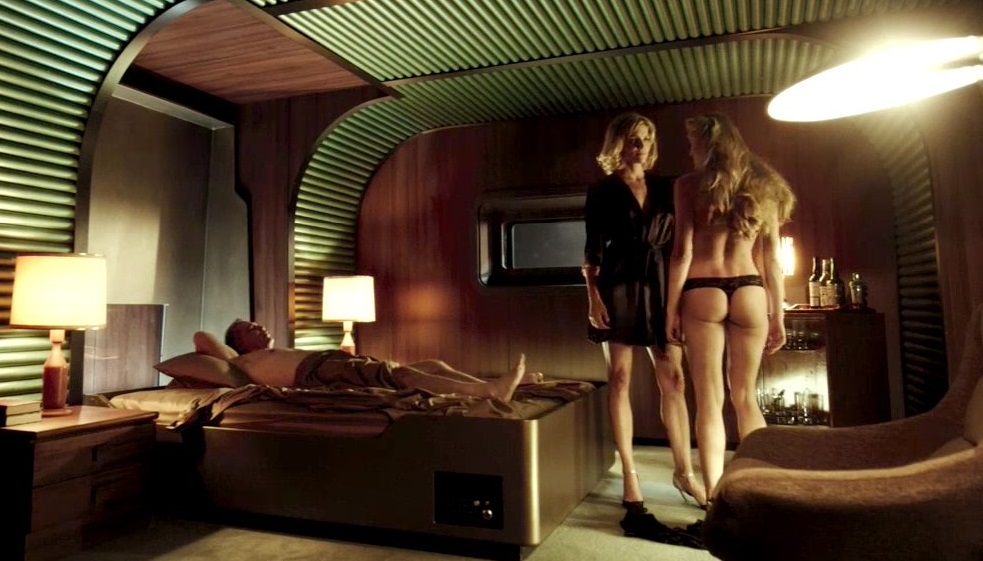 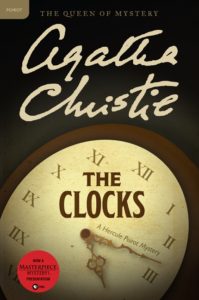 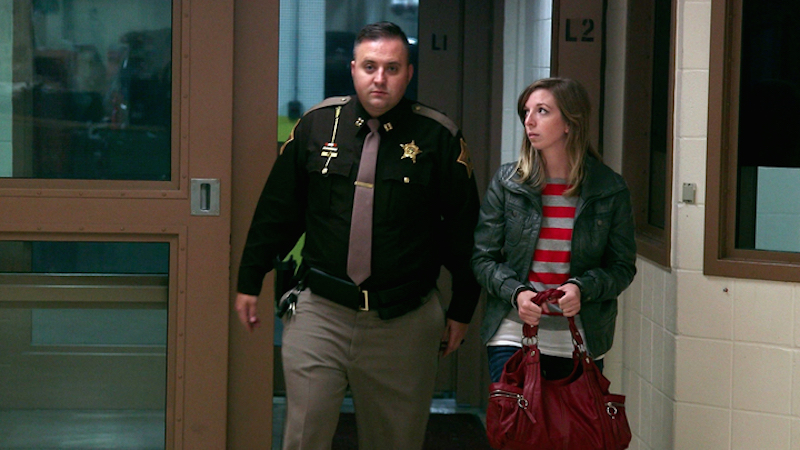 For some strange reason, I’ve been on a true-crime bender. If you’re into that sort of thing, here are two decent offerings:

60 Days In (above) – This is basically Scared Straight! for the reality TV crowd. Seven regular citizens went undercover in an Indiana jail so that jail officials could get the inside scoop and A&E could get decent ratings. What does this show teach us? It taught me that it’s a bad thing to be a woman in jail, but it’s downright dangerous to be a man in jail.

Serial (Season One) – I’d forgotten how soothing it is to listen to bedtime stories, although this podcast, in which public radio’s Sarah Koenig investigates the murder of a Baltimore high school girl, could give you nightmares. 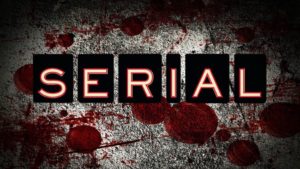 I’ve been going to the movies for many years, but never have I witnessed an audience actually boo what’s on screen. Apparently, movies do get jeered at Cannes. I’d like to see that. It’s now on my bucket list. 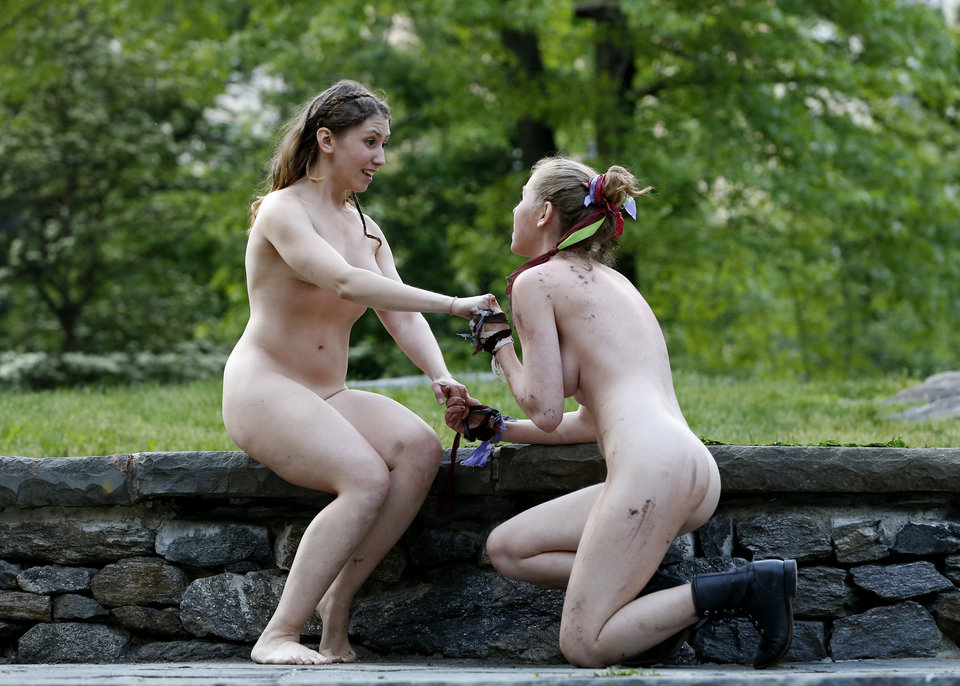 There was an all-nude production of Shakespeare’s The Tempest in Central Park. That’s all you need to know.

Oh, but you probably want to see pictures. In the photos above and below, Kara Lynn is on the left and Marisa Roper is on the right. I think we can all agree that Ms. Roper has a fine ass. You’re welcome. 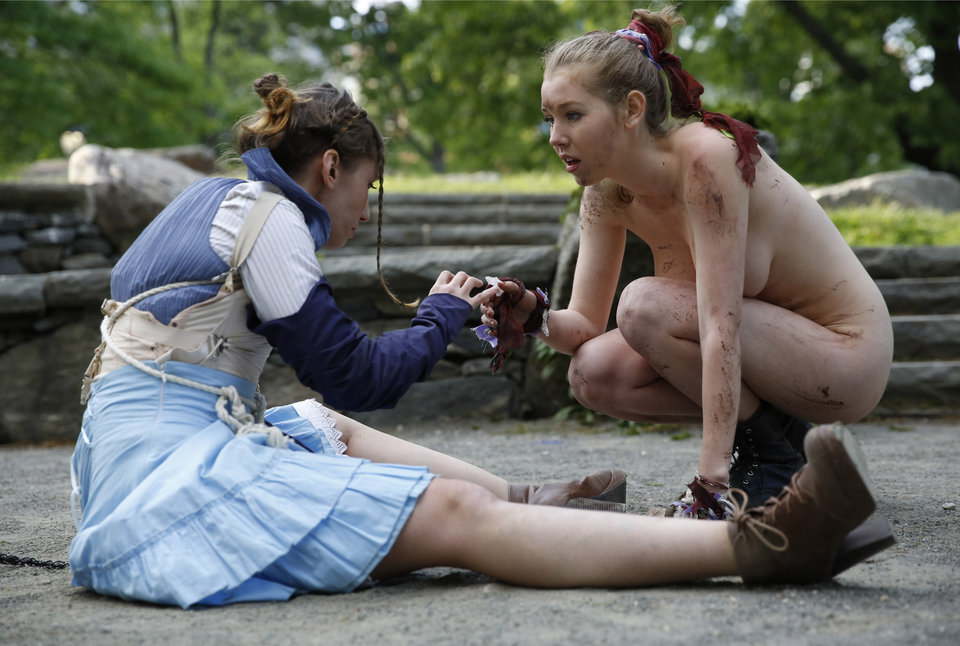 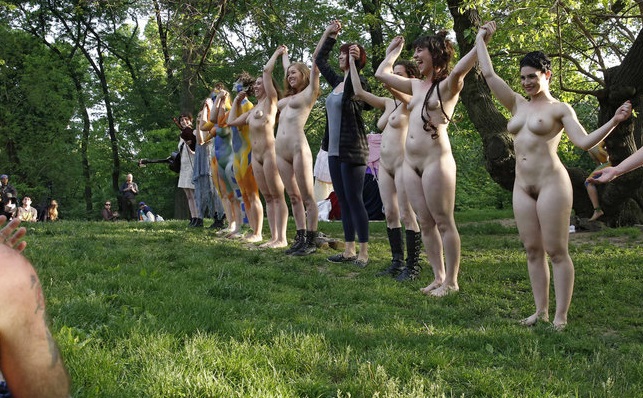 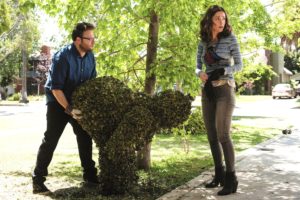 For a comedy, Neighbors has a decent premise: New parents Seth Rogen and Rose Byrne find their neighborhood peace and quiet disrupted when noisy, chaotic fraternity boys move in next door. But what follows is 90 minutes of adolescent humor, nonsensical plot developments, and off-putting gross-outs. If you make a movie this lame, you’d best not reference better comedies like Meet the Parents and Animal House, which only reminds us of what we’re missing.  Release: 2014  Grade: D 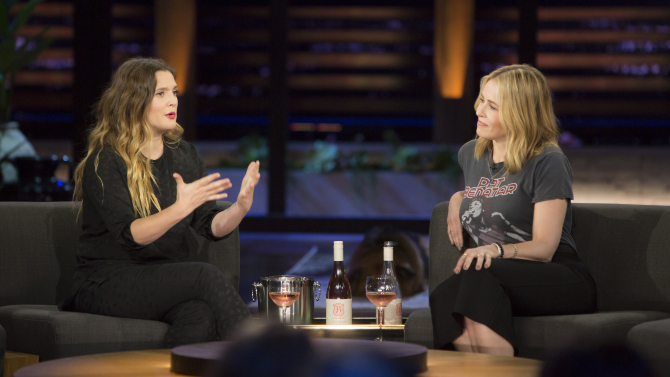 Her monologue sucked, her interviews sucked, and her taped “comedy” bits were nothing more than advertisements for Netflix.

On the plus side, her pet dog, which wandered around the set during the show, seemed to be a good boy. 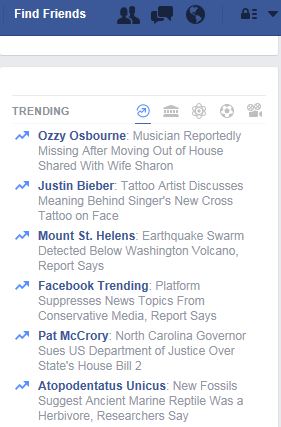 Facebook’s “Trending” module is in the news because it (allegedly) suppresses conservative news. This trending feature is hailed as some of the most valuable real estate on the Internet.

Silly me. I’ve been on Facebook for years, and it wasn’t until yesterday that I even noticed the trending column. I thought it was a box for ads.

I don’t understand why The Washington Post feels the need to assign 20 reporters to dig up dirt on Donald Trump. Wouldn’t one intern watching old Howard Stern videos be sufficient?

Speaking of Trump, the mere mention of his name causes editors at The Huffington Post to froth at the mouth and take leave of their senses. They also take leave of headline proofreaders: 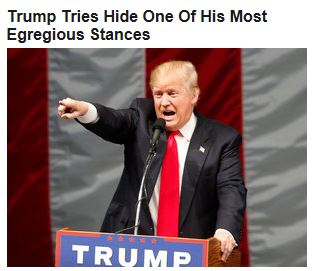 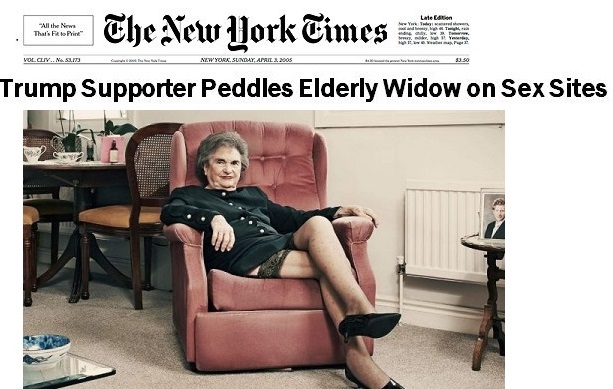 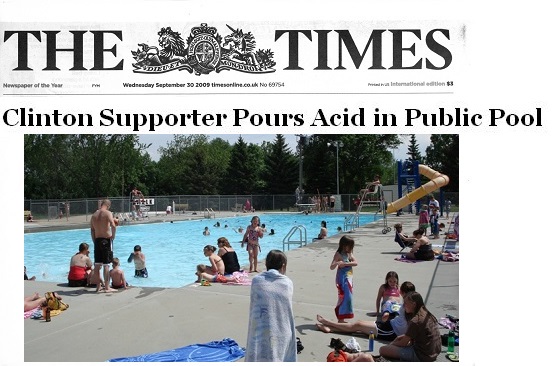 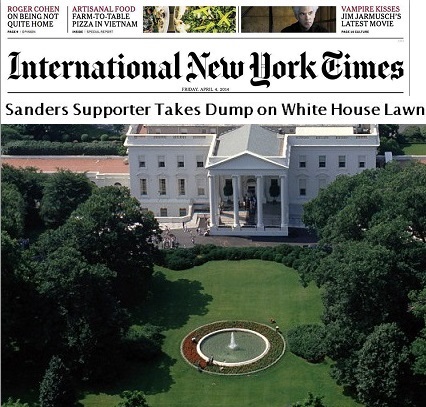 Hey, I’m no fan of Trump, but I’m pretty sure that if you look into it, you will be able to find nutjobs who support each of the candidates — not just The Donald.

Am trying to find a bright side to the increasingly likely prospect of a President Wall Street – er, President Hillary Clinton. I guess one is that, after a lifetime of listening to women blame men for the ills of the world, we men will finally be able to blame women. 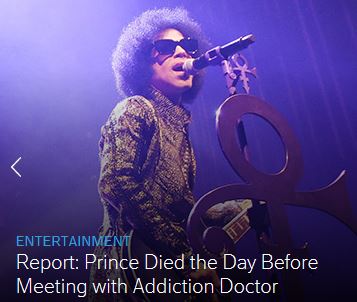 I knew Prince had talent, but wow – meeting with a doctor as a corpse?

What the Dog Saw 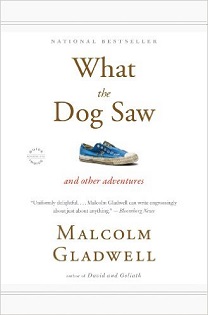 How much you enjoy the essays in Malcolm Gladwell’s What the Dog Saw could depend on how much you care about whichever subject he’s discussing. The New Yorker journalist gets praised for the clarity of his prose, but to me it doesn’t matter how accessible the writing is when the topic is ketchup.  I still fall asleep.

I am also unmoved by Gladwell’s stories about successfully marketing hair dye and vegetable slicers and the masterminds behind their advertising campaigns. Sorry, but a tag-team of Stephen King and J. K. Rowling would fail to hold my interest if the topic is peddling mustard.

On the other hand, when Gladwell turns his attention to the psychology of criminal profiling, or to the root cause of homelessness, his counterintuitive conclusions are often surprising and sometimes enlightening.