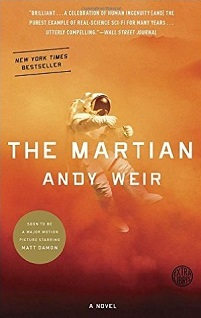 What on Earth is there not to like about this book? It’s a first-time novel from an obscure software programmer who initially gave the thing away as a free e-book, and which is now a bestseller and the basis of a blockbuster movie starring Matt Damon. So kudos to Andy Weir, who transferred his love of all things NASA and Dr. Who into a rip-roaring adventure about an astronaut stranded on Mars.

Did I mention that I loved this book? There are two reasons for that: 1) Our hero, botanist/astronaut Mark Watney, is an engaging smart-ass whose predicament is both harrowing and entertaining; 2) The Martian is what they call a “hard science” novel, in that the events are (mostly) based on real science – no little green men or flying saucers in this story. I confess that at times the extensive math and/or chemistry made my eyes glaze over, but more often Watney’s constant mechanical tinkering was both fascinating and (dare I say it?) educational. His predicament might have been dire, but as a reader, it was great fun to be stuck on the Red Planet with him.

Nitpicks: Apparently, the type of Martian sandstorm that precipitates Watney’s abandonment by fellow astronauts is pure fiction. Also, it’s a stretch to believe that Earthlings would so easily part with millions (billions?) of taxpayer dollars, not to mention risk the lives of five other astronauts, to rescue just one man – not even Matt Damon.