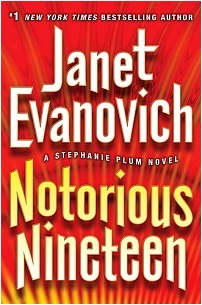 I’ve been critical of Evanovich’s golden-goose series about bounty hunter Stephanie Plum because each new installment contains the same-old, same-old:  Cars blow up, relationships stall, and Stephanie remains the immature ditz.  And yet I keep on reading the books.

Maybe it’s because Notorious feels a bit fresher than recent entries – more introspection; fewer unrealistic situations – but I’m beginning to rethink my complaints.  I’ve been expecting the Plum characters to evolve, but really, should the goofballs on I Love Lucy have “evolved”?  Should Lucy have matured, Ricky calmed down, and Fred run off with a mistress?  Perhaps it’s better if some things never change.