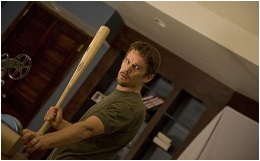 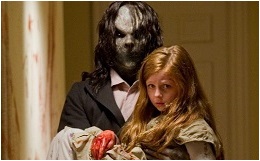 There is a scene early in Sinister that had me on the edge of my seat.  Fred Thompson, playing a crusty sheriff, approaches family man Ethan Hawke with some unsolicited advice.  Uh-oh, I thought, here it comes:  Fred is going to pitch an AAG reverse mortgage to poor Ethan.  But I was mistaken.  Nothing that nerve-rattling happens in this clichéd dud of a horror flick.  It’s just Ethan, baseball bat in hand, prowling the dark halls of his haunted house, and a sound technician blasting noise at the audience whenever something supposedly scary occurs.  Release:  2012  Grade:  D+ 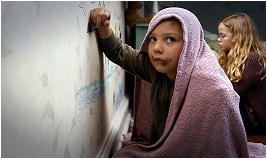 Director Andres Muschietti has a real knack for creepy/scary visuals, which somewhat offsets Mama’s silly premise, dumb plot, and none-too-believable behavior by its characters.  Jessica Chastain, as a musician battling the titular creature for control of two little girls, provides evidence that two Oscar nominations are no guarantee of landing other great roles.  Release:  2013   Grade:  B- 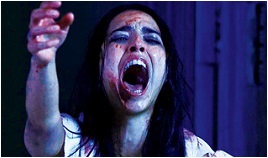 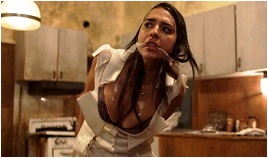 Marga (Cristina Brondo) is the kind of career woman you love to hate.  She gets ahead by trampling co-workers, sleeping with married men, and steamrolling anyone who doesn’t serve her needs.  We spend two-thirds of Penumbra getting to know busty, bitchy Marga, but Twilight Zone-like omens all point to an unhappy (for Marga), yet satisfying (for us) climax.  Just proves that you can’t always trust omens, because Penumbra, until its final act a sleek and suspenseful puzzle, fizzles out at the end, wrapping up with gore-spattered silliness.  Release:   2011   Grade:  C 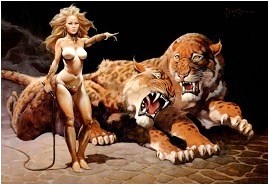 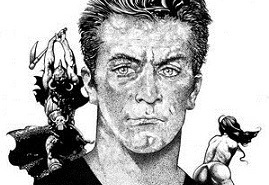 Say the name “Frazetta” at a comic-book convention, and you’ll likely turn heads.  Mention the name anywhere else, and you’ll probably draw a blank stare.  That’s a shame because Frank Frazetta, illustrator-artist extraordinaire, deserves a better legacy.  His bane was that he worked primarily in the world of fantasy, churning out striking covers for everything from horror-comics to Hollywood movie posters.  Frazetta chronicles his colorful life from Brooklyn boyhood to retirement in Pennsylvania, but it’s also a film one can enjoy with the mute button on, simply soaking in a procession of startlingly original warriors, princesses, and demons as they march across the screen.  Release:  2003  Grade:  B