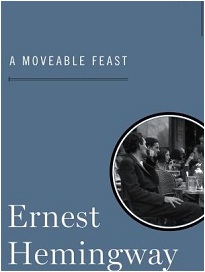 I wonder if this Hemingway memoir would have such a legendary reputation if the people populating its pages were lowly Bill the bartender, Carl the concierge, and Connie the coat lady, as opposed to Gertrude Stein, James Joyce, F. Scott Fitzgerald, and other luminaries from the “lost generation.”

I say that because the stories themselves, derived from Hemingway’s life in 1920s Paris, aren’t all that intriguing – at least on the surface.  Hemingway has lunch with a poet; Hemingway edits a woman’s manuscript; Hemingway goes for a walk; Hemingway has lunch with another poet.  And the celebrated artists we meet through “Papa’s” pen come off less mythic than all-too-human:  We learn that Ford Madox Ford had body odor, and Fitzgerald suffered from penis-size anxiety … if you believe the author, who claimed to be a stickler for “truth.”

But Hemingway’s writing style grabs and holds.  His voice is strong yet remote, as if he noticed everything but none of it really affected him.  He describes a person or situation, and then sums it all up with some pithy, perfect observation, and suddenly those mundane sidewalk strolls and lazy lunches become compelling.