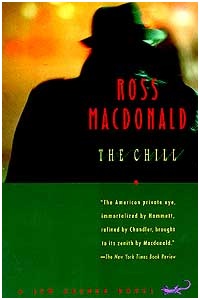 As I was reading this mystery, I was reminded of a Hollywood legend about the movie script for another classic detective story, Raymond Chandler’s The Big Sleep.  Supposedly, the novel’s plot was so convoluted that at one point the screenwriters contacted Chandler to ask him who was responsible for the death of one character.  “They sent me a wire,” Chandler later said, “asking me, and dammit I didn’t know either.”  The Chill, in which Southern California detective Lew Archer attempts to solve several murders, is all plot, plot, plot – but Macdonald’s dialogue is snappy, his action is fast-paced, and his characters are colorful.  Best of all, the denouement features a wonderful twist –  and it doesn’t cheat.