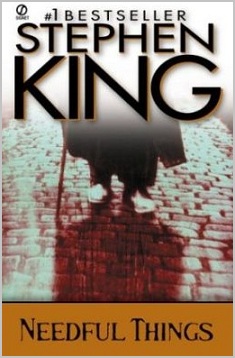 Musings:  1) Needful Things was published shortly after King gave up drinking and doping, which coincides with the decline of his most creative period.  I don’t believe it can be happenstance – the man was simply a more inspired, original writer back when he was snorting and swigging.  2) Needful Things is middling King.  It’s well-crafted, often amusing, and laugh-out-loud funny near the climax.  It’s also over-the-top, alternately too somber or too silly, and not particularly scary.  3) The knight-in-shining-armor hero and his perfect girlfriend are the least interesting characters in the story – too bad we have to spend so much time with them.  4) I do like King’s theme about how our possessions tend to take possession of us.