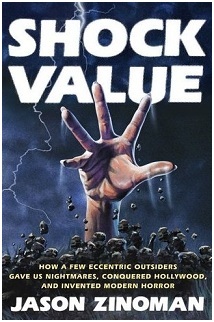 If you are a horror-movie fan, and I am certainly one of them, Zinoman’s biography of the men behind Hollywood’s second “golden age” of horror, the 1970s, is an essential read.  Shock Value is a nice blend of explaining what makes guys like Wes Craven and George Romero tick – and how those ticks show up in their movies.  But I’m sure every fright-flick aficionado will have nitpicks with Zinoman’s critique, and so here are two of mine:  Zinoman points out that most of these directors flamed out after initial success, but he doesn’t offer much of an explanation for why that happened.  William Friedkin (The Exorcist), Tobe Hooper (The Texas Chain Saw Massacre), Romero (Night of the Living Dead) … what the hell happened to these guys?

My other complaint is more subjective.  I happen to believe that Bob Clark’s Black Christmas was the most terrifying movie of the decade, and that John Carpenter (who, incidentally, comes off as a Grade-A jerk in this book) shamelessly stole concepts and techniques from that movie to use in his blockbuster Halloween.  Zinoman touches on this directorial “borrowing,” but inexcusably devotes little text to Clark’s woefully underappreciated, eerie masterpiece.