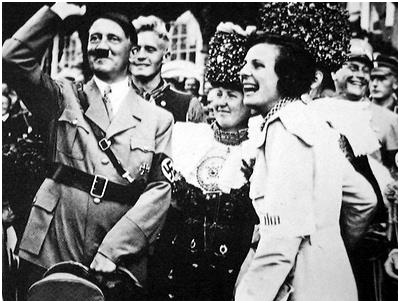 Several years ago, I decided it was high time that I read Adolf Hitler’s manifesto, Mein Kampf.  This is what I wrote in my review of the book:  “You can call him [Hitler] a megalomaniacal monster, but he was nothing if not shrewd and determined.  In Mein Kampf, he exhibits a keen understanding of propaganda, psychology, mass manipulation, class warfare … and the basest human instincts.”  Much of Hitler’s prose, I recall thinking, seemed rather reasonable.  Of course, that was his special talent:  If you want millions to follow you, you can’t come off as a raving lunatic; you have to appeal to people’s sense of injustice in rational terms.

Hitler also knew how to select a good biographer.  Triumph of the Will, Leni Riefenstahl’s infamous documentary featuring the Fuhrer at a 1934 political rally in Nuremberg, captures the mood and fervor of a nation falling under Hitler’s spell.  This movie doesn’t excuse the Nazi movement – but it goes a long way toward explaining it.

Riefenstahl’s challenge as a filmmaker was daunting:  how to take footage of endless crowd scenes (parades, rallies, speeches) – all of it glorifying Hitler and the National Socialist German Workers’ Party – and make it compelling for nearly two hours.  Despite her documentary’s stellar reputation as groundbreaking cinema, I think Riefenstahl was only partly successful.  The camera angles (very high, very low, often dramatic), the editing (juxtaposing Hitler with smiling children – there are lots of smiling children in this film), and other filmic devices are indeed impressive.  But a speech is a speech, and a parade is a parade.  The political rants grow tedious, and the parades become repetitive.

But for the most part, Riefenstahl was as talented behind a camera as Hitler was in front of one.  As the film progresses, the crowds grow larger, Hitler grows more prominent, and the sense that something big is coming is palpable.

Just as in Mein Kampf, the Fuhrer appears calm and reasonable throughout much of the documentary.  Until, that is, the last ten minutes of the film and his final speech.  It is only then, when Hitler begins to rant about race and “best blood,” that his eyes take on a crazed glint, and his voice begins to quake.           Grade:  A- 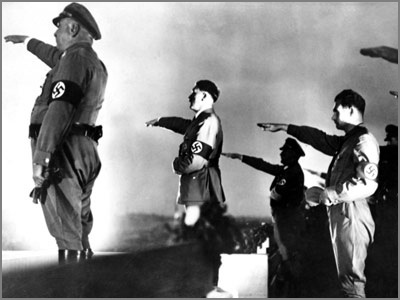 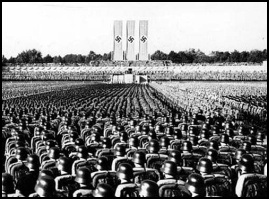