The last time I was really fooled by a movie – by that I mean having my socks blown off, folded, and replaced in my bureau drawer – was in 1999, when writer-director M. Night Shyamalan gave us The Sixth Sense.   Shyamalan followed that ingenious thriller with a string of duds and, although I should know better by now, I continue to hope that someday he will rediscover his old magic.  That’s why I had (dwindling) hopes for Devil, the new horror film not directed by Shyamalan, but produced by him and based on his story.

I give up.  Devil does have a few nice moments, but those come courtesy not of the script but of director John Erick Dowdle, who manages to deliver a few jolts in the movie’s interesting locale:  a cramped office-building elevator in which five people are trapped.  One of the five is the devil – or so we are told in a lame narrative device.

One by one, the members of this little group are bumped off.  Whodunit?  Which of them is the devil?  This setup presents a storytelling challenge, because anyone who has ever read Agatha Christie, or seen more than a few films like this one, will probably anticipate Shyamalan’s obligatory “twist.”

What we are left with is yet another uninspired Shyamalan movie, a 30-minute Twilight Zone episode stretched out to feature-film length.  That’s not good enough, not from the man who gave us The Sixth Sense.  Shyamalan is either unwilling or unable to recapture that old magic, and so, like I said earlier, I give up.       Grade:  C 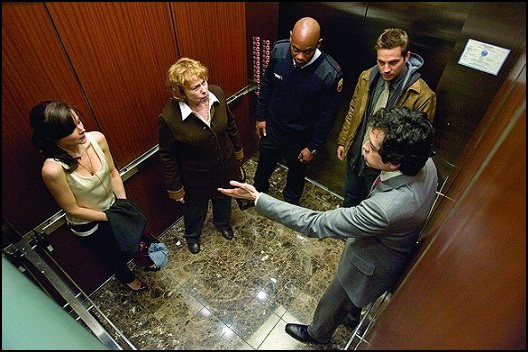 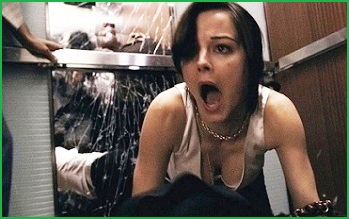