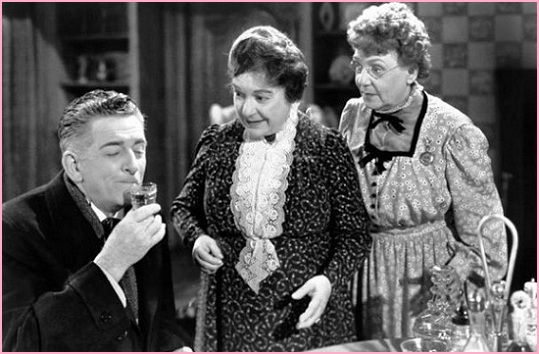 Is it movie-lore sacrilege to suggest that Cary Grant was miscast in one of his most beloved roles?  I recently re-watched Arsenic and Old Lace, director Frank Capra’s 1944 version of the popular stage play, and later I learned that comedian Bob Hope was originally sought for the lead:  Mortimer Brewster, the set-upon nephew of two spinsters who just happen to be poisoning their gentleman callers.

Grant, of course, immortalized the part of Mortimer with a frantic, bug-eyed rendition of the nephew as he tries to make sense of his aunts’ bizarre behavior – and also save their skins.  But when I again watched this delightful (albeit a bit dated) farce, I was struck by two things:  1) the brilliant, subtle portrayal of sociopath Jonathan by actor Raymond Massey, and 2) Grant’s over-the-top, anything-but-subtle frenzy as Mortimer.  To me, Grant overacts something fierce.

When the stage directions call for Mortimer to do a double-take, Grant delivers whiplash.  When he is supposed to be surprised, his eyes burst from their sockets.  When he’s asked to dash across the stage, Grant does acrobatics, leaping and spilling over furniture.  It’s all very amusing, but also distracting.  I have to wonder, would Mortimer have been better played by Hope, an actor more suited to roles that emphasize self-preservation?  Would a sweating, paranoid Hope have been better than a mugging, exasperated Grant?

It’s a moot point, but what is clear is the hilarious turn by Massey, who turns the “Karloff” killer into a prickly psycho whose predominant characteristic is not malice, but rather vanity.  Massey’s glaring reactions to anyone who comments on his physical appearance are hysterical.  Also on the plus side:  Director Capra, who can be mawkish, is restrained here by the limitations of playwright Joseph Kesselring’s plot.  And Josephine Hull, so wonderful six years later in a similar role in Harvey, gives us the ultimate fussy eccentric.     Grade:  B+ 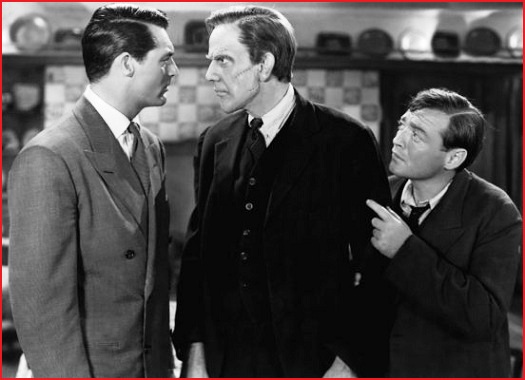 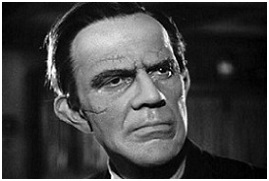 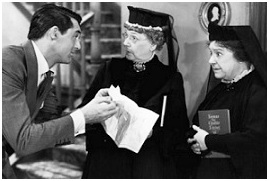