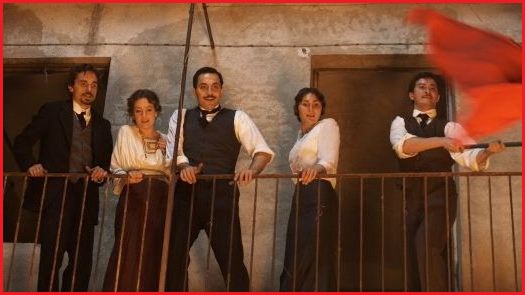 I’ve been trying to figure out why Vincere, an Italian historical drama starring Giovanna Mezzogiorno, left me so cold.  Especially since the movie so desperately wants to be affecting.

Vincere has an intriguing, fact-based story, an Oscar-worthy performance by its lead actress, and gorgeous photography.  The second half of the picture almost moved me, and then I finally realized what prevented it from doing so — the first half of the picture.

Vincere is the story of Ida Dalser (Mezzogiorno), mistress of the second-most-famous dictator of World War II, Benito Mussolini.  Years before Mussolini rose to power, Dalser bore him a son, then was cruelly discarded by Il Duce when it became politically expedient for him to do so.  Not to mention the fact that Mussolini already had a wife and kids.

Dalser, refusing to go quietly, was separated from her son and then shunted from one mental hospital to another.  Was she mentally unstable, or merely hopelessly devoted to the wrong man?  I have no idea, but in the film, her sufferings — which constitute the last (and best) hour of the movie — reminded me of another woman-unjustly-institutionalized drama, Frances, with Jessica Lange.  Frances, unlike this film, was emotionally powerful.

The problem with Vincere is that Dalser, with whom the audience is asked to empathize, is more like a curious lab specimen than a woman you might know.  You wonder:  Is she mildly delusional, or actually mentally ill?  The man she obsesses over, Mussolini, is a completely unsympathetic cad.  The separation of these two lovers could only be a good thing.       Grade:  C+