Seems clear that Larry King is out to convince the rest of us that the male midlife crisis does not strike until one reaches age 76.  Last night, Larry was on CNN talking to Willie Nelson about the joys of smoking pot.  A few weeks ago, the King of swing was out joyriding in L.A. with Snoop Dogg (above).  And now he is all over the gossip rags for allegedly having an affair with his wife’s younger sister.

Who says life begins at 40?

Apparently Entertainment Weekly doesn’t consider the male of the species to be American, because I have a hard time believing that many (straight) men consider Oprah Winfrey to be their “best girlfriend.”

Some years ago there was a news story about a woman who suffered seizures whenever she heard Mary Hart’s voice on Entertainment Tonight.  Seemed unlikely at the time … but now I believe it, because I find myself uncontrollably frothing at the mouth every time Kim Serafin shows up on CNN’s Showbiz Tonight.  Why can’t this woman hold her head still?  Her bobble-head is driving me to distraction. 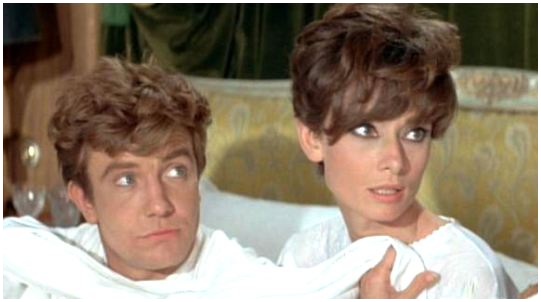 I have an idea for a movie.  We’ll cast the two romantic leads from today’s biggest film, Zoe Saldana and Sam Worthington of Avatar, as an attractive young couple.  We’ll follow them through a cute courtship, then veer into their squabbles over money, child-rearing, and sex.  For good measure, we’ll have them cheat on each other.  Sound like something you’d like to see?  No?

It’s a tribute to old-time star power that Audrey Hepburn and Albert Finney pull off this scenario so effortlessly in Two for the Road, director Stanley Donen’s 1967 comic drama.  And yes, there is a lot of humor in the movie.

Donen uses flashbacks and flash-forwards to chronicle 12 years in the lives of Mark and Joanna Wallace, allowing us to see up close how even an apparent match-made-in-heaven can falter.  With the wrong actors, this wouldn’t work, but hey, we are talking Hepburn and Finney here.  Hepburn, as she so often played in her career, is physically frail yet deceptively tough.  Finney is all gruff and bravado, yet deceptively soft.

The lush cinematography is a bonus as the Wallaces embark on a series of road trips in Europe — many of them quite funny.  And once again, I find myself praising the musical talent of the film’s scorer, Henry Mancini.

So do the Wallaces have a happy ending?  I won’t say, but I will say I’ve thought about which ending — split up or stay together — would make for a more satisfying film, and that’s a very tough call.      Grade:  A-