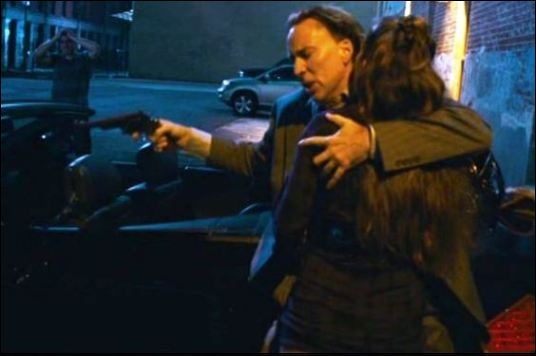 Cage’s Detective Terence McDonagh suffers a job-related injury, becomes addicted to pain-killing drugs and, in his quest to pay off debts, score drugs, and solve homicides, begins to find life in The Big Easy anything but.

McDonagh’s descent can’t be blamed entirely on drugs.  Among his other vices, this bad lieutenant enjoys power-play sex with the girlfriend of a small-time dealer — and forcing the poor guy to watch at gunpoint.  When a local underworld figure comes gunning for him, McDonagh doesn’t think twice about endangering his own family members.  But he does have a soft spot for pet dogs and fish.

Herzog loves irony, and the director seems to be aiming a big wink at his audience. But it’s not enough to camouflage what is, for the most part, just a routine police movie.      Grade:  B-