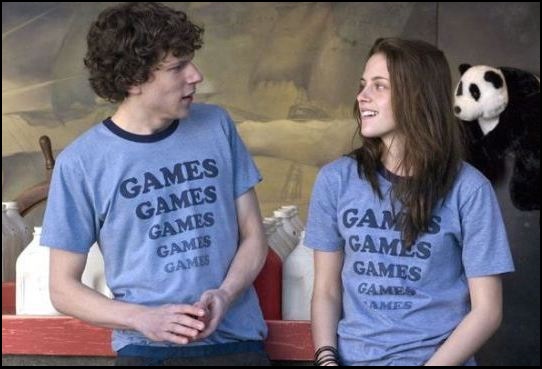 Adventureland is a good example of what happens when you untether talented artists from the shackles of Hollywood junk-meisters.

Greg Mottola wrote and directed this film, which is based on one summer in his youth when he worked at an amusement park.  Mottola previously helmed the cookie-cutter, Judd Apatow-produced Superbad.  Star Jesse Eisenberg went on from this picture to act in Zombieland  — yet another trifling mediocrity.  Kristen Stewart, currently starring in the Twilight films … well, I haven’t seen them, so I’ll withhold judgment in her case.

But in Adventureland, Mottola has written a sweet and funny slice-of-life, with Eisenberg and Stewart sparkling in the lead roles.  That’s the good news.  The bad news?  Superbad went on to earn $170 million worldwide, while Adventureland garnered a mere $16 million domestically.  That’s a shame, because Adventureland has just as many laughs as the Apatow-produced dross; the difference is that Mottola’s latest film has a heart.

It’s the characters that count in this movie, and not just Eisenberg and Stewart.  Bill Hader, Margarita Levieva, and Martin Starr contribute comic highlights and, refreshingly, seem like actual human beings.  The same can be said for Ryan Reynolds as the story’s main villain.  Reynolds’s carousing mechanic comes off more sad and pathetic than malevolent.           Grade:  B+