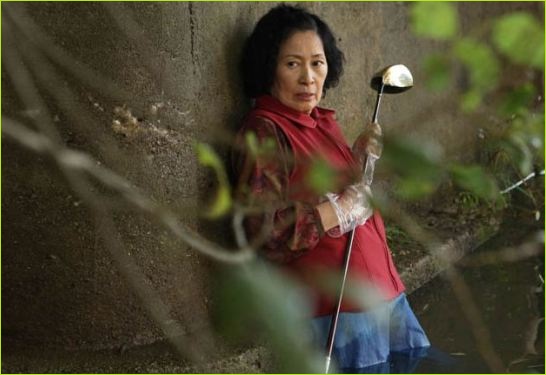 Mother, the new thriller from South Korean director Bong Joon-ho, is being favorably compared to Hitchcock.  This comparison, I believe, is what happens when movie critics see too many films aimed at teenagers; they tend to get all excited when something relatively adult appears on the scene — especially if it has subtitles.

Don’t get me wrong.  Mother is a perfectly serviceable mystery.  Bong (The Host) is a skilled craftsman and he gets fine performances out of Kim Hye-ja, as the mother, and Won Bin, as her feeble-minded adult son.  When the boy is accused of murdering a young girl, Mother’s already heightened maternal instincts kick into overdrive, and the movie becomes a whodunit.  Is the murderer her son, the son’s shady “best friend” … or perhaps Mother, herself?

Despite what some critics will have you believe, the answer to this puzzle is not arrived at in groundbreaking fashion.  In most murder mysteries, the rule is to ask yourself:  Who is the least likely killer?  Could that person be guilty?  Unless the screenplay is unusually clever, nine times out of ten you can guess the culprit.

This isn’t Hitchcock quality material, but Mother does contain some nice surprises, a colorful cast, and a fascinating glimpse at one segment of Korean society.            Grade:  B