Listen up, Deplorables: It’s Oscar time! That means it’s time for you to celebrate and cheer for the celebrities who have made so clear their contempt for you!

Keep buying those tickets, and be sure to watch as your heroes pat themselves on the back at the Academy Awards!

Or, you could subscribe to the words of the late, great Alfred Hitchcock:

“I once said that actors are cattle. However, actors are children, and they’re temperamental, and they need to be handled gently and sometimes slapped.” – 1962 interview

“The fly-over states have become the passed-over states, that’s why red-state voters are so pissed off. They don’t hate us, they want to be us.” — Bill Maher

OK, maybe not as hot as back in her swimsuit-model days (below), but still ….

I’ve decided that there is every likelihood that by the end of 2020, the United States will indeed have a border wall stretching from sea to shining sea.

I now believe this will happen because no one in Washington – including Donald Trump and Mitch McConnell — seems to actually want a wall. And if you take into account the general lack of competence in our politicians, it’s only logical that we’ll wind up with something that none of them really wants.

I finally saw Happy Death Day on my television set.  The 2017 horror-comedy was a hit and has a sequel now in theaters. As a horror movie, it’s pretty generic. As a romantic comedy, it’s just so-so. But there’s no denying the star-power of Jessica Rothe, pictured above, who’s a comic delight.

Jerk-Off Fantasy of the Week:

(Click on photo for, uh, closer examination of 29-year-old Lorrae)

That’s just a hunch. But why else would you advertise like this?

Question: Do celebrities ever hire a low-priced defense lawyer?

A 15-year-old autistic boy goes missing and his parents receive cryptic texts and e-mails, including an apparent ransom demand.

Bleak Harbor was just … average; not terrible, but certainly nothing special. There is a lot of texting and hacking and computer sleuthing, which I suppose modernizes the plot, but this is a story we’ve read many times before. There is, of course, a “big twist” near the end. Alas, the unexpected turn isn’t particularly credible.

I’m sure there’s nothing intentionally smarmy about this voice-over for Tomi Lahren’s new show on Fox:

That’s an up-close and personal look, alright. Also, is it really that cold on the border?

Fox never seems to run out of new T&A talent. Someone named Abby is hosting stuff on their streaming service. Abby is apparently qualified to do journalism because she played volleyball and her dad is a famous basketball coach.

We tried to find pictures of Abby’s butt, which must exist because she played volleyball, but we got tired of searching.

So instead, please enjoy these pictures of Fox’s Anna Kooiman from her Web site:

Celebrity Big Brother contestant Natalie Eva Marie (above) got the boot on last night’s episode. She has often mentioned her real brothers on the CBS show.

I hope for the boys’ sake that they aren’t hormonal teenagers, because this image of their sister could mess them up for life:

What with our minus-30-degree cold spells, we have a bad enough reputation here in Minnesota without the likes of this guy making the news:

The news just gets more and more depressing: 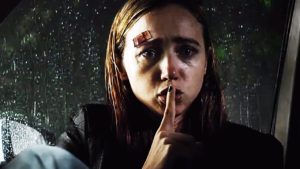 From the Department of “God I Am Getting Old”

Additional evidence came when my buddy at YouTube’s Horrible Reviews devoted an entire segment to a filmmaker who makes poop movies.

I oppose censorship, but it would be nice if more of us would vote with our remotes or delete buttons, so we could start seeing a bit less of this (literal) shit.

“You’re just there to report on the corn-hole competition.” – Leland Vittert to cute co-anchor Kristin Fisher (above) on Fox News. Here’s the video:

Where had I heard that word? Oh, yeah. This movie:

OK, the bonehead governor of Virginia should probably go. But here’s a question for Democrats:

You do realize, don’t you, that if you continue to hammer every public figure for every crime and misdemeanor committed in high school, college, or kindergarten, the only people left to vote for will be spotless gems like Mitt Romney and Mike Pence?