Posted in Movies, Reviews in Short | Leave a comment 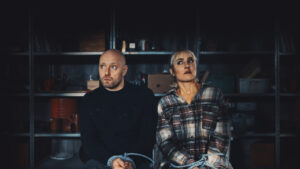 I’m not normally a fan of gross-out humor, which is too often witless and juvenile. And I’m not attracted to gore, which I find a bore. So why am I recommending Norway’s The Trip, which is loaded with gross-outs and gore? Because when done right it can be funny, and The Trip is a black comedy that made me LOL — an event so rare for me that when it does happen, I simply must praise the film.

Noomi Rapace and Aksel Hennie play a married couple who are ostensibly taking a relaxing holiday trip to their lakeside cabin. But peace and prosperity are not in their cards. The plot starts out like The War of the Roses, but then … shit happens. Literally. To say more would be a spoiler, so I’ll shut up now. Release: 2021 Grade: B+