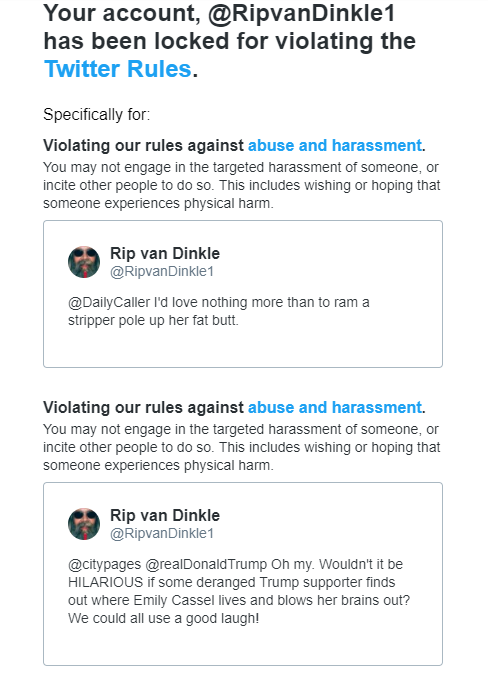 Not so many years ago, on the (rare) occasions when we would get blocked or banned by Twitter, it was a bit shameful. We must have done something bad.

Not anymore. Twitter itself has been exposed as a shameful, but necessary, evil. If you get banned or blocked by Twitter, you must be doing something right.

So what led Rip to make such mean-spirited posts about City Pages editor Emily Cassel and then former Trump lover Stormy Daniels?

Here is a bit of what Cassel had to say when Trump got COVID:

And here is what Daniels recently said about testifying against Trump:

Rip plans to delete his retaliatory tweets about Cassel and Daniels because a) the tweets are old and no one follows him, anyway, and b) like we said, if you want to promote something, Twitter is a necessary evil. For now.

But there is great consolation. Shortly after Cassel’s juvenile missives, City Pages — and Cassel herself — went poof! Cancelled!

As for Daniels, well, her punishment is that she is still Stormy Daniels.

I am thinking of illegal immigration. Conservatives now act as if their overriding concern is the welfare of poor immigrants, who make dangerous journeys to the border, are exploited by drug cartels, and are merely seeking a better life. All of that is true.

But illegal aliens are also willfully breaking American law. And they are not in the least concerned that their self-interest effectively lowers wages for working-class Americans.

If we are primarily concerned about the welfare of the world’s poor, why don’t we just open the borders completely and begin importing the poor from Asia and Africa? And then secretly bus them into Beverly Hills?