In The White Tiger,  a man from a low caste in India hopes to rise in society by becoming a rich man’s chauffeur — but he eventually decides that a more cynical, even murderous, approach is the way to get ahead. I learned some things from the film. I got to witness some of the horrific conditions for the poor living in India without actually living among the poor in India.

But that was also my problem with the movie: It was interesting, but not especially involving. It’s a well-produced film and its populist message is timely, but when the end credits rolled, I thought, “That’s all?”  Release: 2021  Grade: B

A Jewish family gathers around a dining table, bickering and sniping at each other about the shortcomings and sins of their husbands, wives, and cousins — nothing new about that in a comic movie. But what distinguishes writer/director Michael Mayer’s Happy Times is the dramatic segue from a comedy of ill manners into something quite different when simmering tensions boil over into all-out, murderous mayhem.

Happy Times came as a pleasant surprise, possibly because other reviews of the film are either lukewarm or non-existent. But I was consistently amused and often delighted by the family members, whose hang-ups range from mild neurosis to full-blown psychopathy. It’s impossible to predict which of them will snap at a moment’s notice; more than once, I lost track of who had offed (or apparently offed) whom. But that didn’t matter because Mayer’s pace is frenzied and the characters — all of them — are comic gold. Release: 2019  Grade: B+ 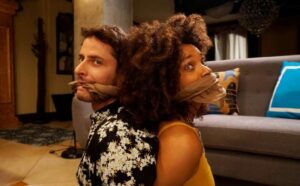 A dinner party from hell.