The Act of Killing

Watching The Act of Killing, I learned that septuagenarian Anwar Congo, a genial-looking grandfather who lives in North Sumatra, has trouble sleeping. Anwar, once a prominent member of an Indonesian death squad, has bad dreams about a man he beheaded, and whose lifeless eyelids Anwar neglected to close before he drove off into the night.  Anwar estimates that, beginning in the mid-1960s, he personally executed 1,000 people.  But Anwar can take comfort because in much of Indonesia he and his elderly comrades are much respected.

These death-squad men are bad enough, but for me the most frightening aspect of The Act of Killing, Joshua Oppenheimer’s Oscar-nominated documentary, is the society in which aging “gangsters” – men who carried out mass killings, supposedly with the goal of fighting communism – are not just tolerated, but often celebrated. Just as in Nazi Germany, this type of genocide couldn’t happen without the approval, tacit or overt, of the society in which it occurs.  It seems to be a nasty trait of the human race that, although we might not perpetrate violence ourselves, we get a vicarious thrill from watching others do so. 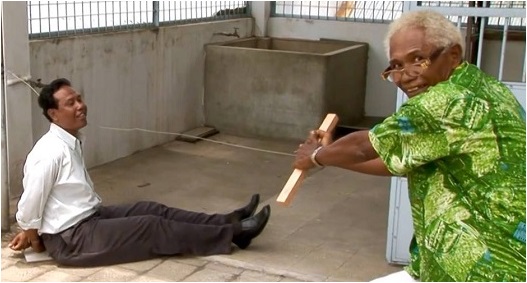 With the help of a friend, Anwar Congo playfully re-enacts one of his killings

Congo says he has nightmares about the atrocities and, apparently, he does get physically ill in the film while revisiting a killing ground.  But at other times, he seems just as unconcerned about his past as does most everyone else.

Oppenheimer apparently tricked Congo and his friends into discussing their sordid past by leading them to believe that they would, with the filmmakers’ help, create a Hollywood-style movie.  Everyone in Indonesia loves the movies, and Anwar is especially fond of John Wayne and The Godfather.  The “movie-making” scenes in this film – including re-enactments of Anwar’s nightmares – are surreal and disturbing.

Horrifying as the story of these men is, it’s hard to sit back and be too judgmental. American movies inspired these guys; American propaganda demonized the communists (allegedly the target of the massacres, although anyone who fell into disfavor with the military or the gangsters was subject to execution) and, I suppose, made Anwar and his pals our “allies.”  But they were poor, uneducated, and without resources, so should we be surprised that in their “fight against communism,” they used not ideology but rather Brando and Pacino as role models?            Grade:  A 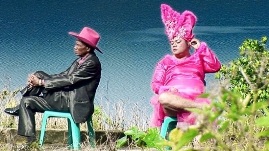 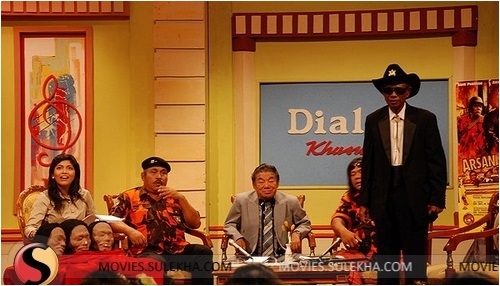 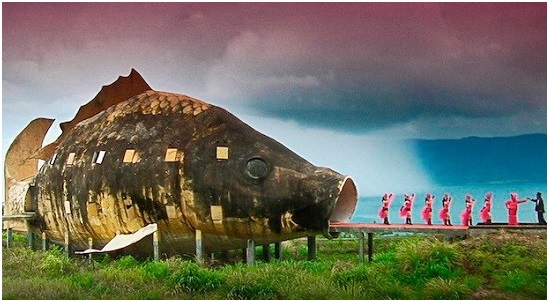