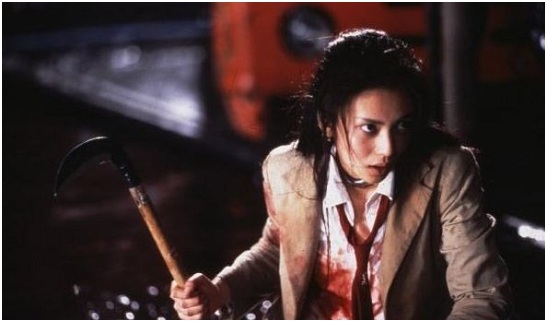 So asks a young student of his classmate, Oki, who is staggering and stumbling down a woodlands footpath.  No, Oki is most likely not okay, because we can see that Oki is bleeding profusely from a hatchet that’s embedded in the top of his skull.  This encounter between two friends in the Japanese cult film Battle Royale sums up my feelings about the entire movie.  Watchable but brain-dead.

Battle Royale, beloved by many young people and a precursor to this week’s much-hyped The Hunger Games, exhibits the same traits as do a lot of teenagers:  It’s full of nonsense and energy, but man, does it take itself seriously.

If you are at all familiar with Lord of the Flies, The Most Dangerous Game, or any of several Stephen King books, then you already know the plot.  In the near future, a small group of people (in this case, ninth-grade students) are stranded on an island and pitted against each other in a deadly game of survival.  But unlike, say, Lord of the Flies, there is no gradual descent into barbarity; these kids are instantly good or instantly bad.  The movie doesn’t want to waste time on character development, not when there are so many heads to cut off.

This is the type of film in which people, most of them gangly teens, are shot multiple times but keep getting up to fight again.  And again.  I suppose that if you can just turn your brain off, it’s also the type of film you might enjoy.

The movie is a good fit for teens because it feeds fantasies in which 1)  adults are evil and out to get youngsters; 2) there is a girl/guy of their dreams out there, somewhere, if only he/she can find her/him; and 3) it’s packed with gory, frenetic, nonsensical action.  For what it is, Battle Royale is well done.  But let’s hope that The Hunger Games appeals to more than teen fantasies.        Grade:  C+ 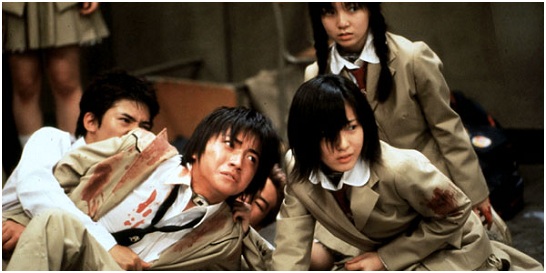 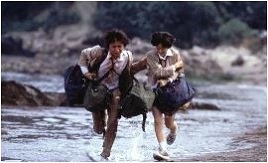 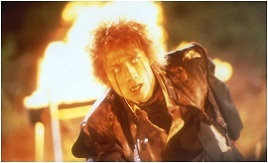 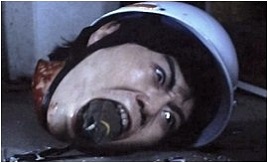 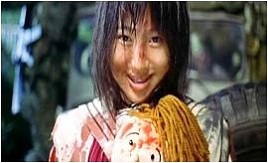 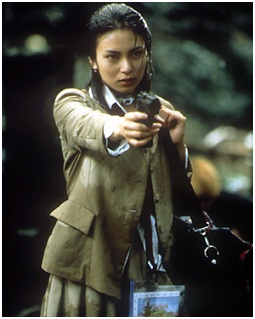