The film does have a lot of things going for it:  It’s a story with supernatural elements that does not insult the intelligence.  It’s a film that depicts mental illness in a sensitive, never sensational, manner.  It’s well-directed, relatively absorbing, and features some fine performances.  But it’s ultimately unsatisfying.

As usual, the culprit here is the script.  The plot is unfocused and, as another reviewer points out, in the end Take Shelter is a disappointing “shaggy dog story.”

Director-writer Jeff Nichols does capture a world seldom shown in the movies:  blue-collar, rural America.  Curtis (Michael Shannon) and Samantha (Jessica Chastain) are working-class stiffs raising a young girl with a hearing disability in small-town Ohio.  Curtis has a problem, too.  He suffers from visions and nightmares that are disturbingly realistic.  Are they a harbinger of doomsday?  Or has Curtis inherited a psychological disorder from his mother, a woman who was institutionalized for similar reasons?

Mostly, Take Shelter is an examination of one man’s descent into mental illness, but we don’t really empathize because we’re never quite sure what kind of movie we’re watching — is it a drama about the devastating effects of mental illness, a la A Beautiful Mind?  Or is it an apocalyptic thriller, an Armageddon in Ohio?  The movie doesn’t really deliver in either respect.         Grade:  B- 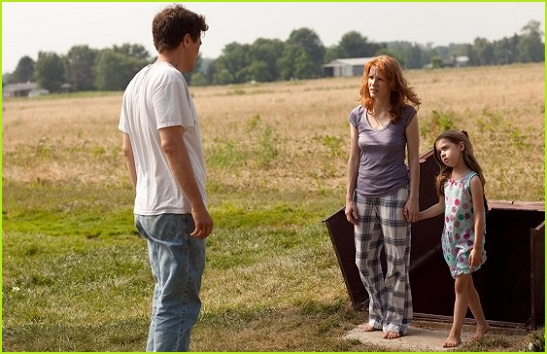