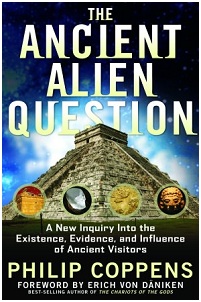 I’ll admit it, this stuff fascinates me:  rocks weighing hundreds of tons that our ancestors were somehow able to move; cryptic references to “gods from the heavens” found in many ancient manuscripts; science’s acknowledgment that there is likely life out there in the universe.  So when I pick up a book like Coppens’s The Ancient Alien Question, I try to have an open mind.  But then ….

There are so many problems with this book.  For starters, it should be called The English Language Question.  I don’t know if it was poorly translated, edited, or written, but much of it is incomprehensible, crammed with irrelevant (at least to the layman) details about disputes within the scientific community, or dull minutiae, such as the components of old cement.  Coppens’s favorite adverb is “clearly,” but there is very little I’d consider “clear” about many of his conclusions.

Consider this example:  On page 202, Coppens cites “evidence” that nuclear technology existed in ancient India by quoting an expert named Francis Taylor.  On the following page, Coppens writes this:  “The first question is whether the named archaeologist Francis Taylor existed.  Alas, no one has ever been able to identify him.”  In an attempt to confer an air of impartiality and credibility to the author, the publisher’s blurb claims that Coppens is “labeled a skeptic by the believers, and a believer by the skeptics.”  Don’t buy it:  The man is “clearly” a believer.

It’s too bad this book is such a mess, because there are a lot of mysteries from antiquity, and it seems unlikely that humans could have accomplished some of their amazing feats without help – from someone or something.  There must be better books on this subject.  Clearly.