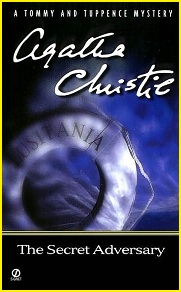 When I think of Agatha Christie, what comes to mind is an old English estate, with a murder or two, and a middle-aged (or elderly) sleuth on hand to unmask the villain.  In other words, I think of Hercule Poirot and Miss Marple.  With Christie, what I do not think of are wild motorcar chases on country roads, gun battles on city streets, and government papers that could trigger war.  That’s Alfred Hitchcock material, or an Ian Fleming plot.  And that’s part of the problem with The Secret Adversary, Christie’s second novel.  The story is out of her comfort zone, not so much a mystery as a frantic spy thriller.

There is a reason that Christie’s young protagonists in this and four more books, “Tommy and Tuppence,” never attained the popularity of Poirot and Marple.  They are an amusing couple, but their adventures are wildly improbable, they enjoy amazing good luck, and they happen upon extraordinary coincidences.  There is action galore – but too few “little grey cells.”