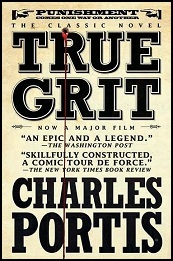 I almost never read Westerns.  I think this is because some of the elements of Western life bore me.  I don’t really care about the difference between a Winchester and a Mauser, nor am I all that interested in horses, homesteads, and hangings.  But I’m beginning to think this oater aversion of mine is a mistake, because some of the best books I’ve read – in any genre – are Westerns.

I am referring to Larry McMurtry’s Lonesome Dove, and I am referring to this book.  In both novels, the hook is the characters.  In True Grit, it’s the voice of one character in particular, 14-year-old Mattie Ross, who narrates the story.  Mattie, who never met a contraction she would not like to flatten, is a bible-thumping delight as she interacts with some of the roughest characters of the old West.  One critic said True Grit “captures the naïve elegance of the American voice,” and I think that sums up the humor Portis mines so well, using the indomitable Mattie as his catalyst.