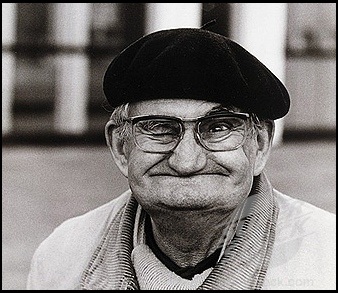 LAS VEGAS, Nevada – Investigators are combing hotels and casinos along the Las Vegas strip in search of a 65-year-old Southern California man who vanished after he was released from custody for not paying a bill for a meal.  Investigators began their frantic search after calls went out for the man’s whereabouts by television personality Nancy Grace.  Grace, the tough-talking fixture on cable news channel CNN, often takes an interest in the disappearances of unattractive, elderly men.

Mitford Mitkowski, a former toilet-lid salesman, was arrested last September at a restaurant in Malibu, California, because he did not have money to settle his check at a downscale truck stop.  Mitkowski’s parents, Marvin and Millie Mitkowski, have been deceased for many years and could not be reached for comment.

In related news, police located several dozen attractive white females and 12 cute, gap-toothed children, all reported missing and all boarding the same plane to Buenos Aires.  One of the missing persons, 9-year-old Amber Bamber, told authorities that all of them were trying to get as far away as possible from the United States.

“We just couldn’t take it anymore,” Bamber said, removing bubble gum from her mouth.  “We wanted to move to a country  far away from Nancy Grace, because her show reports us “missing” even if we are just walking down to the store.  We can’t help it that we are so cute.” 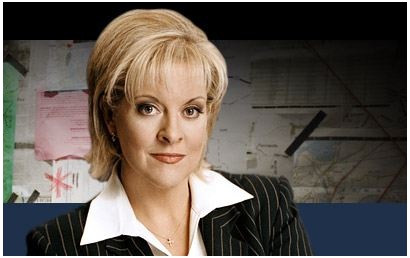 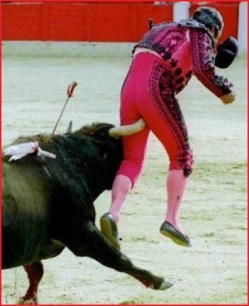 Yes, I know people were hurt.  But I can’t help laughing at The Revenge of the Bull in Spain this week, in which the beast leaped into a crowd at a bullfight and scattered spectators like so many cowchips. 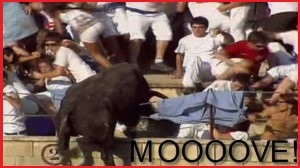 If you haven’t seen the video that I’m referring to,  you can watch it here. 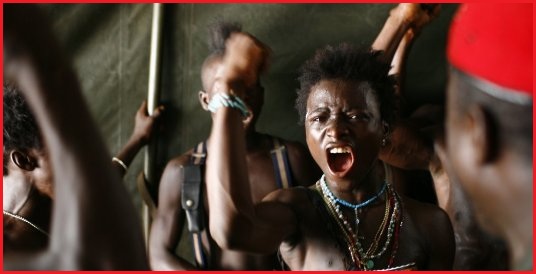 It’s a crazy world for 15-year-old Johnny Mad Dog and his teenaged pals.  In Johnny’s world, he doesn’t worry about asking girls out — he simply kidnaps or rapes them.  When Johnny and the boys meet someone they don’t like, there are no fisticuffs; they have an Uzi to take care of the problem.  And if an older couple tries to reason with them, well, the boys can just force them to strip and then demand:  “You’ll fuck your wife, right now, in the living room … fuck for me now!”  It’s a boy’s life, indeed.

Johnny Mad Dog, with its band of vicious young males, will put some viewers in mind of A Clockwork Orange, but director Jean-Stephane Sauvaire’s documentary-style film is even more horrific because it’s not set in the future; it is fact-based and happening right now.  (Depending on which source you consult, events are based either on Liberia or the Congo Republic.)  This hypnotic horror-show demonstrates what happens when children are recruited to fight adult wars.

We follow Johnny (Christopher Minie) and his militia as they make their way toward the capital of their country, terrorizing anyone who crosses their path.  It’s a mesmerizing march, and these kids resemble a road show from hell.  One guy wears a white wedding dress; another sports gauzy, white angel wings.  These boys don’t worry about anyone dissing their fashion choices.

Between bouts of carnage, Sauvaire reminds us that these thugs are, despite everything, still boys.  A kid nicknamed No Good Advice, whose behavior has been monstrous, is reduced to tears when his pet pig is slaughtered for a meal.  Johnny, whose idea of socializing with the opposite sex is rape, is devastated when a girl he likes is murdered.  We learn that Johnny and the boys aren’t just monsters, but victims themselves.

It’s ironic that this week’s Hollywood box-office champ is The Expendables, Sly Stallone’s latest comic-book version of violence on film.  At one point in Mad Dog, Johnny picks up an Uzi and explains its function to his comrades:  “Chuck Norris used it in Delta Force,” he says.  “So be careful!  The Israelis or Chuck Norris might be around.”  Norris and Stallone movies are filled with senseless violence.  So is Johnny Mad Dog, but that’s where any similarities end.     Grade:  A- 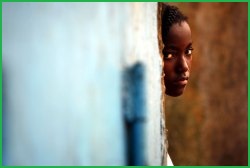 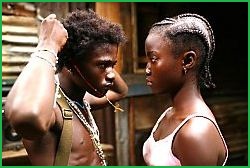