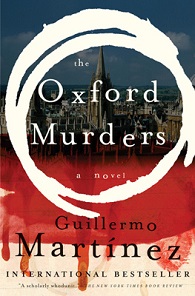 Martinez’s so-so whodunit suffers a bit from what I’ll call “Carl Sagan Syndrome.”  Sagan, the late, great scientist, took a stab at novel writing with Contact – with decidedly mixed results.  When Sagan’s characters in Contact were expounding on something in the author’s comfort zone (astronomy, physics), the story was fascinating.  But when Sagan turned his attention to romance, well … let’s just say his inner 13-year-old was exposed.  Sagan’s love scenes were as awkward as a young math whiz straining to kiss his first crush.

Similarly, Martinez, a mathematician, does well when his main character, logician Arthur Seldom, is lecturing on the Pythagoreans or speculating on murder, but other elements of the book suffer.  The secondary characters, the historical setting, and even the mystery are bare-boned.  Still, Seldom as a mathematical Sherlock Holmes, and the youthful narrator as his Watson, do make an entertaining duo.