I don’t ask very much of a horror movie, really I don’t.  I just want it to do one thing:  scare me.

Apparently, that’s asking a lot.  Studios and movie-rental companies are well aware of the demand for horror, and there are hundreds – maybe thousands – of genre titles out there.  Some of these horror flicks have competent acting, quasi-believable storylines, decent cinematography, and capable direction.  They do not, however, ever, ever, ever contain anything that scares me.  They do have lots of gore, but blood and guts are not scary; they are merely repulsive.  Achieving a good scare on film is the equivalent of a no-hitter in baseball, something rare and memorable.

I think the last time a horror movie made me jump was in 2002, when that creepy girl in The Ring climbed out of a television set.  The Ring was an American remake of a Japanese film, and so is 2004’s The Grudge.   Japan has quite a reputation for scary movies these days, so I decided to watch Ju-on, a 2000 direct-to-video cheapo that inspired not only The Grudge, but also a number of sequels.

The low-budget little thriller got me good – one time for sure, maybe twice.  Okay, twice.  There is one scene in particular, set on a staircase near the end of the film … well, I’m not going to spoil it.

I can’t in good conscience recommend much else about Ju-on.  Its plot is silly, derivative, and at times incoherent – so no kudos to the screenwriter.  The acting is pedestrian.  But the director and his crew of photographers, editors, and soundmen obviously studied their horror movies.  They know timing, framing, and lighting, and they applied them very well.  I wanted them to do but one thing, and that they did.  They scared me.  Maybe twice.      Grade:  B 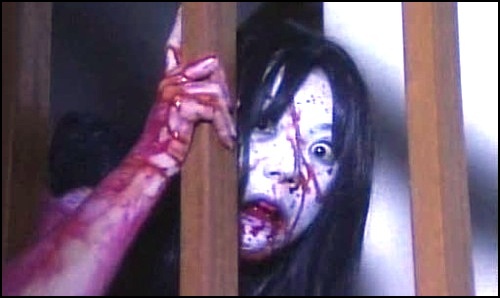