Tales From The Grouch

The Grouch has penned yet another disturbing tale for your reading pleasure. Check out “Cold-Hearted Bastard,” in which Kenneth has a hot date — until things turn cold.

Here’s a complete list of Grouch’s short stories with links (in green):

“Homebodies” — The people next door.

“The Porthole” — Be careful what you wish for.

“Wisdom” — Cabin in the woods.

“The Americans”  — Kevin goes for the gold.

“Margaret” — The greatest love story of all time?

“The Climate Changer” — Earl has a secret weapon.

“An Overcast Day”   — The important thing in life.

“A Small Problem” — It’s not the size of the boat?

Tales From The Grouch: “Cold-Hearted Bastard” 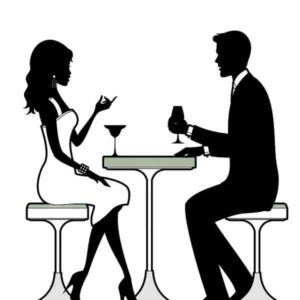 Kenneth stared across the table at his female companion and decided that, after such a disastrous start, the date was going quite well, thank you very much.

He’d arrived at the restaurant-bar 20 minutes early so that he might scope out the place. He took an unobtrusive seat at the T-shaped bar so that he could observe his date when she walked into the establishment. That was his custom on blind dates, especially when he’d never met the girl, had only connected with her through an online dating site.

But 20 minutes had passed, then 30 minutes, and no sign of her. He left his rum and Coke on the bar and made a tour of the separate dining room, just in case she’d slithered in while he was otherwise occupied and was waiting for him at a table. But the only customers in the restaurant had been other couples, several families, and two single women who looked nothing like Jordan’s dating-profile pics. He’d gone back to his drink at the bar.

Forty-five minutes. Kenneth squirmed on his barstool and frowned at his rum and Coke. This rarely happened to him. Online, he was charming and entertaining. He posted real pictures of himself, because most girls told him he was quite handsome. He told the women that he was “comfortable” — never the word “rich” — thanks to his employment as an industrial designer. Girls were impressed by the “designer” part but generally baffled by the “industrial” part, which was fine by him.

Eventually, they would agree to meet him in person. The women would discover that, in real life, Kenneth was just as charming, amusing, handsome, and “comfortable” as he had professed in his online profile.

And then the two of them would go back to his place.

It was an hour now, and no sign of his date. He’d been stood up. Or perhaps she’d had some unexpected issue arise. Kenneth downed his second rum and Coke and stood up to leave.

As he headed toward the exit, he glanced into the restaurant, did not see the girl, turned toward the door, and …

… hold on. There was a blonde woman, 35-40, seated by herself at a window table. She had one hand on her purse and the other was holding a menu.

Yes, no question, it was his date. He mentally kicked himself. This had happened to him before, more than once. He should have known. The woman at the table was a good 10-15 years older than the smiling pixie in her profile photos. Also, a good 20 pounds heavier. She had wrinkles that did not appear in her photographs.

Women often “fudge the truth” on dating sites, especially truths about age and weight. He knew this, but still managed to overlook her seated alone at her table.

Nevertheless, she was attractive enough. Kenneth walked over to introduce himself.

Her name was Jordan, and she was fetching. She had written on her profile that she was “partial to corny jokes.” When Kenneth excused himself to go outside to “indulge my nasty habit” (smoking) and had rejoined her five minutes later, she asked about the weather.

“Partly cloudy — with a strong chance of Jordan,” he’d quipped, and she had laughed heartily. Too heartily. Kenneth himself was not partial to corny jokes, but he’d do — or he’d be — whatever it took.

She had asked about his employment and leaned forward when he described the “designer” part but grew foggy-eyed listening to the “industrial” part. He’d told another corny joke about how “nerdy” his work was and then changed the subject.

After an hour, their conversation shifted from small talk to full-on flirtation. Jordan was a professional massage therapist, and this led to no end of double-entendres and silly puns about her clients. Jordan ordered another drink and began regaling him with tales of her customers’ idiosyncrasies and … their fetishes. She found most of their kinks quite hilarious. And incomprehensible.

“I think most men have some kind of fetish,” he’d said. He began studying her body, making little attempt to disguise his male gaze. It was a good body. He planned to spend time with it. At a leisurely pace.

From years of experience, this is what Kenneth had learned about most women’s idea of fetishes: To most of them, a “good fetish” was incredibly lame. Some older women still considered sex with the woman on top to be a fetish. Other women thought that if the female called her lover “daddy,” that was “kinky.” If a man wanted to wear the woman’s panties prior to the act, that was a fetish — but borderline close to a “perversion.”

To Kenneth, all of the above was been-there-done-that. Sex in public places? Boring.

In some ways, Kenneth was old-fashioned. He preferred fornication in a private place. He liked the missionary position. Control was very important to him.

The older the woman, the less likely she was to be experimental. Calling Kenneth “daddy” in bed was as unimaginative to him as sex with a blow-up doll.

Kenneth had studied Jordan’s dating-site profile, also her other pages on social media. And now he was studying her face-to-face. She was vanilla, in turns of kinky things. But she had a nice body. And she displayed submissive tendencies.

“I like to be on top,” he told her. “I like to be in charge. And I don’t like it when the girl tells me what to do. The more passive she is, the better.”

Jordan sat back in mock horror, and then flashed a coquettish smile.

While Jordan luxuriated on his living-room sofa, admiring the “comfortable” bachelor pad of a successful industrial designer, Kenneth fixed her another drink in the kitchen. He was thinking about what would come next. He didn’t worry about it, because the evening had been according to plan up to this point, and he saw no reason for that to change.

As with all his dates, this one had asked about his romantic past. “Do you still keep in touch with your exes?”

“Oh, yes,” he’d replied, truthfully. “I keep in touch with all of them. No worries in that department. No harassing late-night phone calls, no bitter arguments, no money disputes. Put your mind at rest about that. Besides, I have no intention of you ever becoming an ex.”

Her eyes went wide at that last comment, and then closed as she imagined a future with this handsome, charming man.

“Do any of your exes live nearby?” she inquired, trying to sound nonchalant.

“Certainly,” he said. He handed her the drink laced with a special brew of Ecstasy and other narcotic fixings. “Although the word ‘live’ is stretching the truth. A bit.”

Kenneth rolled off the top of Jordan’s lifeless body and examined her nude form. The sex had been good.

She would preserve well, he thought. He surveyed the other plastic-sheet-encased bodies in his freezer-room and searched for a suitable place to position this latest conquest. He thought Jordan would fit nicely between the bodies of Elizabeth and a girl whose name he had forgotten, on the cement slab near the freezer’s door.

Yes, Kenneth thought, Jordan would be quite comfortable there.