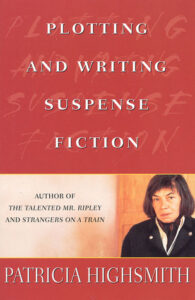 If you’re not familiar with suspense novelist Highsmith (1921-95), there’s a good chance you are familiar with the movies adapted from her books. I’m thinking especially of Strangers on a Train and The Talented Mr. Ripley.

I’ve read just one of her novels, Ripley. This is what I wrote about it in 2004:

[Highsmith] draws us into the sociopathic mind of Tom Ripley, a small-time con artist who makes the leap into full-fledged murderer. As Ripley connives his way into the world of privileged Americans in Italy, Highsmith tells us what “Tom wanted,” and what “Tom felt” and, before long, we are so seduced by Ripley’s good fortune, charm, and cleverness that we nearly give him a pass when “Tom’s wants” include bludgeoning people with boat oars and glass ashtrays. Ripley then becomes sort of a cross between Dostoyevsky, with Tom’s cat-and-mouse games with the police and his (fleeting) sensations of guilt and paranoia, and Nabokov, with our protagonist justifying his actions to himself, and to the reader. Clever, clever stuff; and highly entertaining.

I also wrote that the book wasn’t perfect:

Highsmith uses a plot device that Agatha Christie sometimes employs, and which never fails to annoy me. She has Ripley interrogated twice — once as himself, and once posing as one of his victims — by the same Italian policemen. At close quarters. We are asked to believe that the police are foolish enough to believe that Ripley is two different people merely through his use of hair coloring, and eyebrow pencil, and changing his pattern of speech. I don’t buy this when Christie does it, and I don’t buy it here.

To her credit, in Plotting Highsmith acknowledges struggles with the police-procedure aspects of her books. She cites the danger of portraying cops as unrealistically stupid.

But mostly, the book is an enlightening description of the writer’s lot: the plot snags, “writer’s block,” and the hassles of everyday life that threaten to undermine a good book. (Stephen King also deals with these “mundane” obstacles in his On Writing, which is also quite good.)