Tales From The Grouch: “Thwup!” 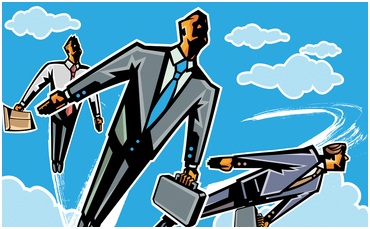 Mr. Brickbottom adjusted his Van Cleef & Arpels’ cufflinks. He straightened his Tom Ford tie, and glanced at the corner of his office, at the shiny new X.222 PowerPak. He pushed a button on the ebony console on his desk, and silently began counting to five …

On the count of four, the office door opened and his secretary, the ever-efficient, ever-timely Eliza Toot, ran a hand through her red hair and smiled at him. Brickbottom ran his own hand through his own hair — recently groomed at a cost of some five hundred dollars.

“Good morning, Ms. Toot. I was wondering what time they scheduled my three o’clock.”

Brickbottom glared at Toot. Was this her idea of some kind of joke? But then he realized his error. “Of course, of course. I meant to say, where have they scheduled my three o’clock? I don’t want to miss it.”

From the hallway outside of Brickbottom’s office, there came a faint sound: “thwup.”

Ms. Toot consulted her daily planner. “The conference room on the 38th floor, Mr. Brickbottom. Would you like me to be there?”

Brickbottom opened his mouth to reply, but before he could say anything, Ms. Toot was thrust violently over his desk and fell clumsily onto his lap. Without a word, Ms. Toot removed herself from Brickbottom and scurried back to the other side of his desk.

“Quite all right, Toot,” Brickbottom said, readjusting his tie and brushing back his hair.  “I take it you forgot to remove your Pak.”

“I’m so sorry, Mr. Brickbottom. Yes, I just got in ten minutes ago, and then Mr. Barnstebble approached me with some issue or other … I quite forgot about the Pak.”

Out of the corner of his eye, Brickbottom watched as an intern in the hallway, some cute young college student named Julie, flew past his office in a blur. “Thwup.”

He turned to survey the scene outside his 36th-floor office window. A score of businessmen and businesswomen were soaring through the air, no doubt late for work, judging from their harried expressions. A few of them whizzed by just feet from his window.

As he was observing this scene, one of fliers, a man in a grey suit and fedora, halted in mid-air.  The man appeared to convulse … lurched forward a few yards … convulsed again … and plunged 36 floors to his death.

“Better move the three o’clock to one o’clock, Ms. Toot. This can’t be good.”

Ms. Toot was all business again. “Yes, sir.” She turned to leave the office.

Toot nodded and began to leave the office, but was again propelled forward by some unseen force. She smashed headlong into the office door. “Thwup.”

Mr. Brickbottom was alone now in his office. The meeting was to take place in less than an hour, but it seemed pointless to him. He looked again at his X.22 PowerPak, and then out the window. More of them were falling now. It was lunchtime, but instead of making their way to restaurants, people were plunging face-first onto the sidewalks and streets far below.

It was a full-scale catastrophe, and Brickbottom, architect of this disaster, contemplated his options.

He studied the bookcase across from his desk. The top row was lined with cans of Flatula, his company’s main product. Combined with the X.22, Flatula produced a form of energy that had replaced cars and planes and buses and gasoline. It had been hailed as a “miracle product.” People would consume Flatula, attach their PowerPaks, and propel themselves anyplace and anytime that they liked. It was the ultimate “green” energy.

But something was obviously going horribly wrong. People like Ms. Toot and Julie the intern could no longer control their propulsions. Others, like the poor businesspeople outside his window, were falling to their deaths. And it was all Brickbottom’s fault.

Brickbottom slowly rose from his chair and put on his PowerPak. He made his way to the window, opened it, and stepped out onto the ledge.

What could be the problem? Was it the formula, Flatula, or was it his pride and joy, the X.22 PowerPak? If either was flawed, he was effectively finished. He and the company he had created.

Brickbottom reflected that his formula and device had been tested and tested and tested … no, the problem must be human error. People were not operating them correctly. He stepped off the ledge and farted. “Thwup.” He activated his PowerPak.

Ms. Toot knocked gently on Brickbottom’s office door — eight times. No answer. She wanted to make sure he would be at the meeting, especially since everyone was calling and demanding that he be there. Including members of the board of directors. She pushed open the door and peeked around it.

Mr. Brickbottom was not at his desk. His window, however, was open.

Ms. Toot frowned and walked quickly to the window. She looked out, then down. She saw a spinning, cartwheeling figure plummeting toward the pavement. The figure’s shiny cufflinks twinkled in the sunlight.