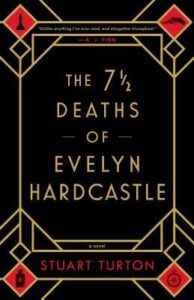 I can only imagine the time and effort that went into the crafting of this story, in which the hero finds himself charged with solving a murder but with a bizarre handicap: Every time he wakes up, he’s inhabiting a new body, and this new person is also charged with solving and/or preventing death at an old English mansion.

The plot involves too many characters to remember, endless time shifts, and the ever-problematic concept of time travel. Oh, and there is also the body swapping. I get weary just trying to describe it.

I do admire Turton’s self-imposed challenge and his ability, I guess, to successfully weave such an intricate web. But was all that trouble worth it, from a reader’s perspective?

Well, yes and no. Early on, I had to decide whether the book was time-consuming piffle, or if I should just go with the flow. I am predisposed to enjoy murder mysteries, so I chose the latter. There are entertaining, action-packed sequences. But because of that labyrinthine, head-scratching plot, reading the novel was often more chore than fun.