A confession: Knives Out is the kind of movie I am predisposed to like before I’ve seen even one second of it. It’s a murder mystery set in a spooky mansion and with an Agatha Christie-like cast of suspects.

OK, I’ll concede that the above synopsis sounds like, oh, maybe 5,000 similar movies. But this time, there’s a decent budget and big-name stars. So bring it on!

Alas, Knives Out is good, but not that special. It’s handsome and well-produced. It’s amusing to watch Daniel Craig channel Kevin Spacey’s Frank Underwood accent from House of Cards. But the much-heralded plot is nothing you won’t find in scores of Netflix crime shows, or in an old episode of Poirot.

It’s true that you don’t find many mid-budget movies with stories like this anymore. But that isn’t because Hollywood doesn’t make them; it’s because they’ve all moved to TV.  Release: 2019 Grade: B+ 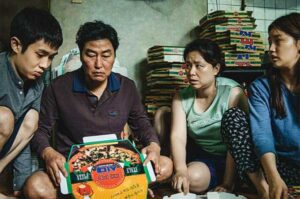 Parasite, a black comedy/thriller from Korea, boasts the distinction of being the first non-English-language film to win a Best Picture Oscar. Here is what Wikipedia has to say about it: “The film was considered by many critics to be the best film of 2019 as well as one of the best films of the 21st century.”

I’m not sure if that’s damning critics or damning movies of the 21st century.

Don’t get me wrong. I enjoyed Parasite, in which a rich family is infiltrated by a clan of con artists — think Al Bundy and his goofball brood from Married … with Children, but with Korean faces and street smarts. The elaborate con and the ensuing carnage are all amusing enough but … one of the “best films of the century”? Nope. Not even close.  Release: 2019 Grade: B 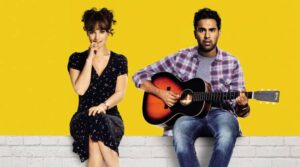 Maybe to some eyes and ears, Yesterday is a bit on the schmaltzy side. To me, it’s simply “old-fashioned.” And these days, when it often feels as if every new film is a downer, filled with cynicism, realism, and snark, old-fashioned comes as a relief. Even if it is a bit schmaltzy.

Himesh Patel is amusing, and Lily James is charming in this romantic fantasy about a musician who, for some unexplained reason, suddenly joins a very exclusive club: a handful of people who remember The Beatles. And Coca-Cola. And cigarettes. Patel introduces John and Paul’s music to the world and subsequently becomes a star in his own right. Or in his own wrong.

Aside from the premise, everything else in Yesterday is familiar. Boy meets girl, boy loses girl, boy gets girl, boy learns valuable lesson. In the meantime, we hear lots of Beatles songs. I’ll take that kind of old-fashioned any day. Release: 2019 Grade: B+