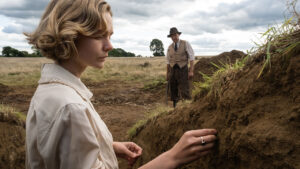 Here’s a fact-based “prestige picture” that’s very classy, very pretty, and very … bland. Well, at least the second half of the movie is.

Ralph Fiennes and Carey Mulligan are a pleasure to watch in the first half, in which an obscure excavator (Fiennes) finds an ancient Anglo-Saxon ship and a true soul mate (Mulligan) on land the young widow owns in Suffolk. But once the big find is found, the movie bogs down with extraneous subplots about another couple’s romance and looming war with Germany and … not nearly enough Fiennes and Mulligan.

The film would have been stronger had The Dig ditched reality and instead focused more on its two leads. Release: 2021  Grade: B- 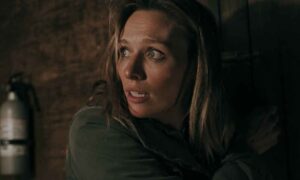 Most horror movies that are destined to fall apart tend to do so in the third act. Too few of them know how to “stick the landing.” So, kudos to the McManus brothers for pulling off a damn-fine ending in Block Island, in which an unseen force wreaks havoc on an East Coast seaside village.

The problem with this low-budget film is the first two-thirds of it, in which less-than-stellar acting and a plodding plot give no hint of the good things to come. Release: 2020  Grade: B-