My hunch is that, people being people, voter fraud happens all the time. The question isn’t whether there is voter fraud, but rather how widespread is it?

We’ll never be able to catch all of it, but how much of it are we willing to tolerate?

Perhaps the goal of a “great reset” is admirable, even desirable. I’m not invited to Davos, so I have no clue. The problem is, people being people, no one in charge can be trusted to “reset” society.

The people on top are self-interested, hypocritical, and corrupt. And so, is it surprising when they meet resistance when they try to impose their great reset, without consent and in a sneaky manner, on an unsuspecting, uncooperative populace?

Along with income inequality, seems to me that our biggest problem is the gradual breakdown of law and order. We have all these laws, but we only enforce some of them. Certain people are allowed to flout them while other folks are not.

I think it began with (sorry, potheads) marijuana. We have federal laws against pot possession and dealing, but enough of us don’t like those laws that we allow many states to simply ignore federal law. Same thing with immigration; now we have “sanctuary cities” that do as they please, federal law be damned. This year, we’ve moved on to quarantine rules. Some people and places ignore them, others do not.

By the way, if my above complaints have you thinking that I must be a cantankerous coot, I direct you to the name of this Web site.

I was watching a Travelocity ad on CBS Wednesday night, and a funny thing happened: a television show called The Amazing Race broke out. 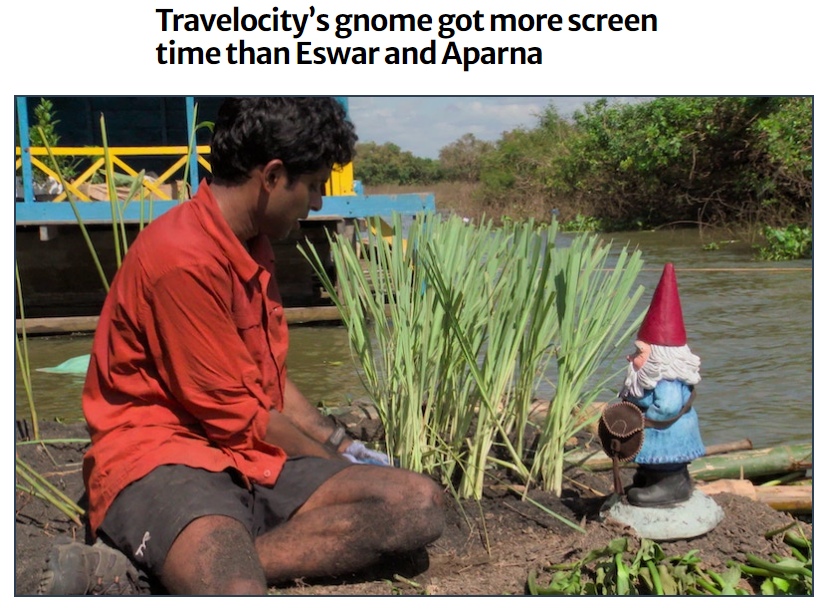 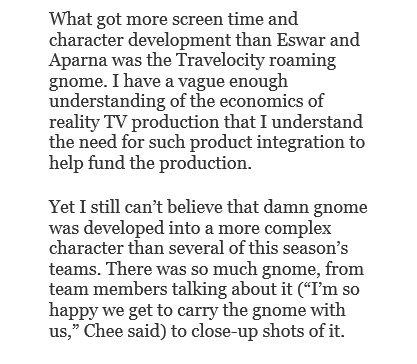 Greedy CBS. Why not just replace host Phil Keoghan with a fucking gnome?

This week’s review is short because, frankly, I’m sick to death of politics. I want to retreat into fantasy.