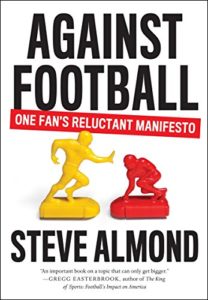 I suspect that Almond is mostly preaching to the choir with his book about the evils of American football. If you’re already down on football, you’ll cheer him on. If you’re a fan, you’ll view him as a spoilsport.

Either way, it’s difficult to argue with many of his points. Football does cause brain damage; NFL owners do extort taxpayer money for new stadiums; college student-athletes are anything but; etcetera, etcetera.

Some of Almond’s assertions are questionable. On the “homophobia” alleged to be rampant in the NFL, he drags out the stereotype about how players who dislike locker-room showers with gay teammates are actually afraid of their own sexuality. Does that mean that women who prefer not to shower with males are, in fact, afraid of their own sexuality? Is that a flawed comparison?

But football does present a dilemma. Physical aggression is ancient and part of our DNA. I’m not sure what you do about that other than channel it somehow – like through watching football. My take: It’s best to stop supporting high school and college football. As for the pros, they are handsomely paid and they now know what they are getting into.