I guess the only way we’ll learn the truth is for Kavanaugh and Trump to show their penises to Congress. On live TV, of course.

It takes some major-league cojones to make that claim when the promise that got you elected – The Wall – can’t get past one or two bricks on a wheelbarrow.

Our ex-presidents go on talk shows and, sooner or later, get asked about UFOs, Area 51, and that sort of thing.

Seems like if ever we had a president who wouldn’t mind spilling the beans about little green men, it’s the dude in the White House right now. Has anyone even asked him?

Seems like the country is watching two very different movies right now. Half of us are watching All the President’s Men; the other half is watching Seven Days in May.

All the President’s Men (above) is about Deep Throat helping The Washington Post take down Tricky Dick Nixon. Recommended for liberals.

Seven Days in May (below) is about Deep State attempting to take down President Fredric March. Recommended for Trump supporters.

Talking heads keep telling us that Brett Kavanaugh will have his “life destroyed” if accusations of sexual misconduct keep him from the Supreme Court.

Give me a break.

Did Merrick Garland have his “life destroyed” when he was denied a Court position? Is he living in a cardboard box under some freeway?

I am drawn to feisty intellectual Camille Paglia for two reasons: 1) Being a straight man, I appreciate any feminist, like Paglia, who does not indulge in obligatory male bashing, and 2) I share Paglia’s aversion to “herd mentality.” She’s a contrarian, but often for good, fact-based reasons. It’s refreshing to find a feminist willing to take on “women’s studies” dogma and cultural icons like Gloria Steinem.

Her main theme in this collection of previously published essays is that modern feminism downplays human nature — or the role of biology — in modern life. Every problem cannot be solved by social engineering, she believes. We are who we are.

A minor complaint: If you don’t know what Paglia makes of Katharine Hepburn, Amelia Earhart, or Dorothy Parker, she will let you know on page 35. And on page 176. And on page 222. Etcetera, etcetera. If you weren’t aware that Paglia wrote a feminist-themed letter to the local editor when she was just a teenager, she will relate that story multiple times.

Then again, this is a collection of Paglia musings from a period of 25 years. If you feel you are a lonely voice in the feminist wilderness, you probably feel the need to repeat yourself.

When the “good guys” on your show are all criminals, you have to go deep with your “bad guys,” and good lord, the villains on Netflix’s Ozark are truly a bad lot.

With its nice-family-gone-wrong plot, Ozark would like to be the new Breaking Bad. It’s not that good, but it is eminently watchable, thanks in no small part to this rogues’ gallery of evil: 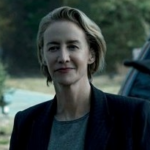 American Horror Story:  I’ve only seen the first episode of “Apocalypse,” but I’m thinking this show has probably jumped the shark. Series creator Ryan Murphy is busy doing other things, other projects. The only sign that he’s still around is the show’s continued emphasis on male ass.

The Purge: Two episodes in, it’s not as god-awful as I expected. Of course, that could change.

This is the synopsis for a 2015 Russian series on Netflix:

“As four Russian friends grow up in the early ‘60s, life, love and the curse of success threaten to derail their dreams.”

Sounds like a Cold War version of Dawson’s Creek, or some similar tug-at-your-heartstrings dramedy. But perhaps not.

Here is the poster:

OK … unless this is actually the Russky version of Porky’s, you might want to change that title.

The Far Side Gallery

I pretty much lost interest in the “funny pages” decades ago because so few of them were actually funny. An exception was Gary Larson’s single-panel classic, The Far Side. Larson’s loopy, goofy illustrations looked adolescent but displayed out-of-left-field wit. I mean, how can you not smile at this?

That’s the first cartoon you see in The Far Side Gallery, an anthology of Larson’s syndicated strips from 1982-84. Here is another example from the book:

But I have to admit that I found this book a bit disappointing. For every absurdist gem like the two examples above, there are a dozen entries that seem either dated, lame, or (to me, at least) incomprehensible. Maybe Larson improved with age; perhaps by purchasing this collection of his early work, I just picked the wrong years.

But man, when Larson was good, he was very, very good.

Good thing I buy cheap tennis shoes, so I don’t have to worry about boycotting Nike and its “sacrificing” spokesman.

Meanwhile, in Montana, apparently there is a raging Senate battle between Sgt. Carter and … Sgt. Carter (below).

For you youngsters who don’t recall Sgt. Carter, this is Sgt. Carter:

Tell that to the National Council of Teachers of English.

“Unlike baseball … football does not wimp out at the first drop of rain. Football forges ahead through downpours and snowstorms.” – Camille Paglia

Thursday night’s NFL opener was delayed by bad weather.  When did the NFL start delaying games because of rain?

Speaking of Camille Paglia, I would love to see her and Fran Lebowitz go at it – in a debate, that is.

Get your minds out of the gutter.

I can picture young Tom Cruise and young Steven Spielberg teaming up to make a film like this 30 years ago. The result might have been a popcorn classic. Unfortunately, young Ansel Elgort as getaway driver “Baby” lacks Cruise’s charisma, and filmmaker Edgar Wright seems primarily interested in action scenes.

The action scenes are pretty good – especially Wright’s clever use of a synchronized soundtrack.  But there is also a lot of mundane exposition filling the gaps between chases. Baby Driver is an agreeable ride for a couple hours. But it ain’t no popcorn classic. Release: 2017 Grade: B

Hereditary reminds me of 2014’s The Babadook: Both films are creepy, absorbing family dramas … but it’s a stretch to hail either as a modern horror classic. In Hereditary, Toni Collette plays a cursed mother who is besieged – to put it mildly – by mental illness and violent tragedy in her small, tight-knit family. All of this doom and gloom is detailed in a superb first hour. But, as in Babadook, the “horror” that dominates the second hour is simply not that original, nor that scary. Release: 2018 Grade: B

Lots of clowns, pea-brains, and Chicken Littles in Washington D.C., but I’m hard-pressed to name one who combines all three character traits better than this guy:

Unless, of course, he’s some sort of evil genius and is simply toying with all of us ….

Last week we waxed eloquent about the wondrous escapism of YouTube conspiracy videos.

But if you’re seeking some other form of addictive time-wasting, check out Crazy Days and Nights.

It’s the wondrous escapism of Hollywood gossip, in the guise of a guessing game.

“Bringing up the FBI and the Justice Department rattles a lot of feathers.” – Jedediah Bila mixing her metaphors – or something – on The Five.

These pictures of Bila rattled my feather. Ruffled it, too: