It’s tempting to write off Aval (English title: The House Next Door), India’s homage to Hollywood horror classics like The Exorcist. Much of the dialogue (a peculiar mix of Indian languages and English) and relationships evoke corny melodramas from the 1950s. At some point the story, in which a doctor and his wife learn that someone in their Himalayan neighborhood is possessed, stops making a lot of sense, and a few scenes are unintentionally funny.

However … there’s no question that several of director Milind Rau’s set pieces are chilling, with clever camerawork and stunning visuals. Also in its favor: the movie is consistently entertaining. Release: 2017  Grade: B+ 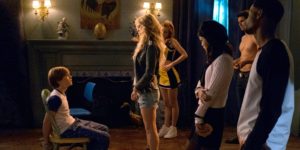 A 12-year-old boy discovers that his oh-so-hot babysitter is actually a psychotic devil worshipper in this Netflix horror-comedy that starts out silly and grows progressively more ridiculous. But no worries: It’s meant to be silly, it’s well-produced, and it’s often amusing. Oh, and Samara Weaving gives a killer performance as the blonde from hell. Release: 2017  Grade: B+