Yes, James McAvoy is impressive playing a psycho with multiple personalities in M. Night Shyamalan’s latest “comeback” picture, the thriller Split. Problem is, McAvoy’s disturbing characters often seem like the only reason to keep watching the movie. The plot, in which McAvoy’s crazy man abducts three teenage girls and confines them in a basement, takes a decent premise and goes from clichéd to ridiculous to boring. Sorry, but this is hardly a return to form for Shyamalan.  Release: 2017 Grade: C

The Edge of Seventeen 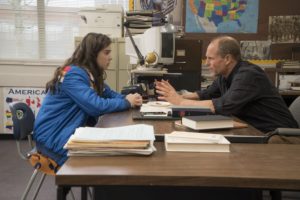 After enduring the first 20 minutes of this coming-of-age comedy-drama, I wasn’t sure if I could continue watching. Writer-director Kelly Fremon Craig’s script employed done-to-death voiceover narration, a la The Wonder Years, and worse, the protagonist was an incredibly bratty and vulgar teen. Eww. But then a funny thing happened on the way to study hall: The more our heroine was assailed by life’s slings and arrows, the more I grew to like her. By the end, I was cheering for her. Unlike so many teen-oriented movies, this one is smart, poignant, and boasts a winning performance from star Hailee Steinfeld. Release: 2016 Grade: B+

The Big Sick has a lot going for it: It has heart, and it has endearing performances from writer-star Kumail Nanjiani and the supporting cast. Nanjiani plays a stand-up comedian of Pakistani descent who has to deal with his Muslim-traditional family and, after his WASP girlfriend lapses into a coma, her bickering parents.

Unfortunately, The Big Sick also has a Big Flaw. As the ailing girlfriend, Zoe Kazan is clearly intended to be spunky and lovable. But whenever her entitled, annoying character appeared on screen, I began to feel ill. Release: 2017 Grade: B-