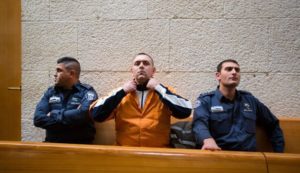 Shadow of Truth is a crime documentary in the mode of Making a Murderer, but I thought it was even more disturbing than Netflix’s 2015 miniseries. Both series suggest that an innocent man is incarcerated for a murder he didn’t commit. But in Murderer the mystery revolves around an apparently commonplace sex-crime, whereas in this Israeli series, the killer of a high school girl was, possibly, motivated by a bizarre, gruesome compulsion. One complaint:  Four episodes are not enough to do justice to such a convoluted case. Release: 2016  Grade: B+

A Malevolent Something named “Diana” terrorizes a single mother and her two kids in this James Wan-related horror flick (he produced). Diana only appears to her victims when the lights are off, and director David Sandberg makes good use of our primal fear of the dark and the fact that what we don’t see is often scarier than what we do. Too bad Sandberg’s treatment of our other sense, hearing, is much less sensitive. To me, it’s cheating when every scare-shot is accompanied by a DEAFENING SOUNDTRACK!  Release: 2016  Grade: C+ 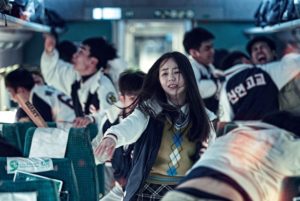 I guess it’s a cultural thing, but Korean movies are often unintentionally humorous to my American eyes. The South Korean actors don’t just cry; they wail hysterically. They don’t just shout; they scream at the top of their lungs. It comes off like a clinic on how to overact.

On the other hand, it’s refreshing to find a snark-free, sarcasm-free story — like time traveling back to 1950s Hollywood for wholesome, goofy fun but with modern special effects. Busan is non-stop entertaining, with heroes who are clearly good and villains who do all but wear black hats when passengers on a high-speed train do battle with zombies. It’s a lot of fun. Just try not to chuckle too much at the acting.  Release: 2016  Grade: B+