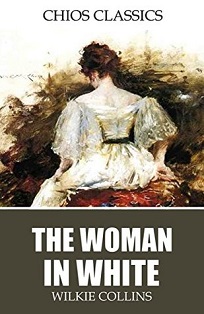 I do love me some Victorian literature. Dickens, Thackeray, the Brontes — masterful writers, all of them.  The Woman in White, published in 1859 by England’s Wilkie Collins, is not one of my favorites from that era, but it does have its charms.

The plot:  A pair of plucky Britons does battle with an evil Italian spy when the corpulent con artist attempts to swindle a young heiress by replacing her with a lookalike impostor.

What I liked:  The lengthy melodrama was initially published in serial form, and it’s easy to see how magazine readers of the day got hooked. Collins is a master at building slow-burn suspense: It can be a bit of a slog on the way to a chapter’s climax but, once you get there, the payoff is often rewarding. Collins also introduces a villain for the ages in the egotistical, silver-tongued Count Fosco.

What I didn’t like:  The youthful heroes aren’t nearly as interesting as the malevolent count. The beautiful heiress is typical of so many “damsels in distress” found in Victorian literature, a fragile specimen who faints at the slightest provocation and must be shielded from anything and everything remotely unpleasant. (She’s an apparent precursor to some of today’s college students, with their “trigger warnings” and “safe spaces.”) Here is one passage describing the precious snowflake that is Lady Glyde:

“The effect of the good news on poor Lady Glyde was, I grieve to say, quite overpowering. She was too weak to bear the violent reaction, and in another day or two she sank into a state of debility and depression which obliged her to keep her room. Rest and quiet, and change of air afterwards, were the best remedies which Mr. Dawson could suggest for her benefit.”

And that’s how she reacts to the good news.